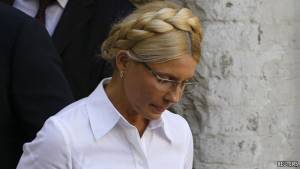 YULIA TYMOSHENKO, Ukraine’s former prime minister, is no stranger to a prison cell. In 2001, she was incarcerated for 42 days during a stand-off with Ukraine’s then president, before being exonerated by a court.

Yet her dramatic courtroom arrest yesterday, during her trial on charges of concluding an illegal gas-price deal with Russia in 2009, came as a surprise. The heroine of the 2004 pro-Western Orange revolution, Ms Tymoshenko has long predicted that she will be found guilty. A conviction could lead to a ten-year prison sentence.

She has fiercely protested her innocence and insisted that the trial is a politically motivated farce designed to destroy her as a rival to Viktor Yanukovich, the country’s president. (Many in the West agree.) Ukraine will hold parliamentary elections next year and a presidential poll in 2015, and Ms Tymoshenko is by far the most prominent opposition leader.

She was taken into custody for an unspecified period yesterday after the presiding judge, Rodion Kireyev, accused her of systematically disrupting the trial’s proceedings. Soon afterwards, amid chaotic scenes inside and outside the court, she was driven—handcuffed and surrounded by riot police—to a detention centre in Kiev. Local reports suggest she is being held in a VIP cell.

Ms Tymoshenko has not, it is true, been the model defendant. She has refused to stand for the judge, called him a monster, dispatched mocking Tweets on her iPad from the courtroom, turned up late and pretended that she does not speak Russian.

Yet her disrespectful courtroom behaviour hardly justified her arrest. It looks instead like an attempt by Mr Yanukovich’s government, which nurses a deep personal grievance against Ms Tymoshenko, to test the waters by assessing international and domestic reaction to her detention (which may last only a few days).

If that is the purpose of her theatrical arrest, Mr Yanukovich is unlikely to be reassured. Russia, a powerful regional broker and a country not known for its dedication to due process, issued a statement that sounded like a rebuke. The Russian foreign ministry insisted that the gas deal for which Ms Tymoshenko is on trial was completely legal, and called on the Ukrainian government to ensure that “basic human norms and rights” are observed in her trial. Reaction from the United States and Europe has, needless to say, also been negative.

Since he came to power last year, Mr Yanukovich has tried to forge a foreign policy based on good relations with Brussels, Moscow and Washington. He has not always succeeded. He has paid lip-service to basic democratic principles while appearing to rule Ukraine in an increasingly authoritarian style.

If Mr Yanukovich was considering leaning on the court to convict Mrs Tymoshenko, the reaction to yesterday’s arrest may suggest that the political price of doing so may be too high.