The Kyiv District Administrative Court at 1 a.m. on Sunday morning banned peaceful gatherings outside the Pechersky District Court in Kyiv where the trials are taking place of former Prime Minister Yulia Tymoshenko and former Minister of Internal Affairs Yury Lutsenko. The news was passed to Ukrainska Pravda by Deputy Serhiy Pashynsky who was at the court hearing.

In this the court partially allowed the application from the Kyiv City State Administration. It restricted the right to hold peaceful gatherings on Dekhtyarivska St, no. 13 along the entire perimeter and on Khreshchatyk St and Maidan Nezalezhnosti [Independence Square].

The court did however turn down the application to ban the erection of “small architectural forms” – this referring to the tents in which “BYUT National Deputies are consulting with members of the public” – i.e. the tents erected by those protesting against the prosecution and arrest on Friday of Yulia Tymoshenko, former Prime Minister and leader of the Batkivshchyna – BYUT party – translator].

Mr Pashynsky said that after the court announced the ruling, the Deputies asked the Judge whether they had understood correctly that reception of members of the public was permitted, but the Judge responded only by reading the court ruling where nothing is said about this.  He added that the BYUT deputies would be continuing to see people outside the court.

It was learned at around 8 o’clock on Saturday evening that the Kyiv City Administration had applied to the court to restrict the right to peaceful assembly. 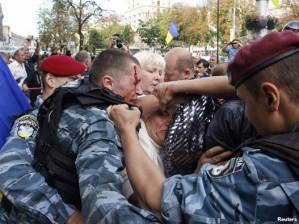