Human Rights Ombudsperson, Nina Karpachova will apply for the restraint measure against former Prime Minister and leader of the opposition Batkivshchyna / BYUT party and faction in parliament, Yulia Tymoshenko to be changed from remand in custody.  The Ombudsperson’s representative, Anatoly Paliy visited Ms Tymoshenko in the SIZO where she has been held since Friday.  He said that she felt OK, was in positive mood and did not complain of the conditions. At her request, a television and fridge had been brought to her. There are two other women in the cell with Ms Tymoshenko. A demonstration is taking place outside the SIZO in protest at her arrest. Around 100 people are taking place and have not dispersed since Friday.

Mr Paliy said that Yulia Tymoshenko had turned to the Ombudsperson and that the latter would be endorsing the application by her defence lawyers for Ms Tymoshenko’s release. 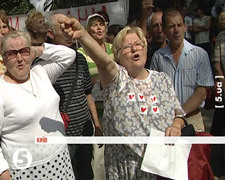