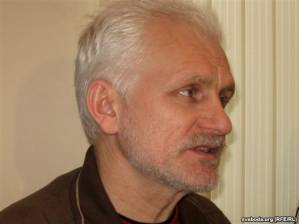 There has been international condemnation of the arrest in Minsk of the head of the prominent Belarusian human rights group Vyasna, RFE/RL’s Belarus Service reports.

Financial police searched Ales Byalyatski’s apartment and dacha and Vyasna’s office on August 4 before remanding him in custody for 72 hours and formally charging him with large-scale tax evasion.

Vyasna has been active in reporting on the police crackdown on peaceful antigovernment protests. It also campaigns on behalf of political prisoners.

The Lithuanian Foreign Ministry issued a statement protesting Byalyatski’s arrest. It said Lithuania and other EU member states will undertake further action to secure the release of Belarusian political prisoners.

In a strongly worded statement, the Organization for Security and Cooperation in Europe, the pan-European rights watchdog, condemned the regime’s actions against dissidents, calling for the immediate and unconditional release of "all political prisoners and civil society activists."

Azubalis said Lithuania and other EU member states will undertake further action to secure the release of Belarusian political prisoners.

Meanwhile, Lithuania’s Justice Ministry acknowledged today that it passed to the Belarusian authorities details of Byalyatski’s bank account and those of hundreds of other people, under what it said was a bilateral agreement.

Vyasna said on August 4 that the data served as the basis for Byalyatski’s detention.

"Dragging people [off] the streets takes us back to the dark communist past that we do not want repeated ever again, " Buzek said in a statement. "This is unacceptable on our continent in the 21st century."

The International Federation for Human Rights, of which Byalyatski is vice president, has also expressed concern and called for Byalyatski’s immediate and unconditional release.

The office of the UN High Commissioner for Human Rights today called on the Belarusian authorities "to guarantee in all circumstances the physical and psychological integrity of Bialatski and all human rights defenders in Belarus."