Protesters find way around ban on peaceful protest in Kharkiv

Several hundred people defied a court ban on peaceful protest on Tuesday evening in Kharkiv. As reported, the Kharkiv District Administrative Court on Tuesday issued a ban on protests on Freedom Square in the city from Tuesday till 28 August.  The ban covered peaceful gatherings planned by the Kharkiv regional branches of the Batkivshchyna Party; the People’s Self-Defence Party and two other organizations.  The grounds given were that “mass festive events” had been approved via a Mayor Instruction from 5 August, and that people attending needed to be able to move freely.  It seems less than clear from these mass festive events are, however on Friday 5 August the former Prime Minister and leader of the Batkivshchyna Party, Yulia Tymoshenko was taken into custody, hence the planned protests.

The head of the Kharkiv regional branch of the Batkivshchyna Party, Arsen Avakov, however, arrived at Freedom Square where the indefinite protest was planned and showed the police cordoning off the Square from protesters a copy of the Law on Freedom of Movement.

While the police blocked access to Freedom Square, the protesters began erecting tents and a sound system on Sumska St near the metro Universytet entrance.  They tried to get on to the Square but were stopped by police.

Around 300 protesters gathered in the early evening holding Ukrainian flags and Batkivshchyna symbols. 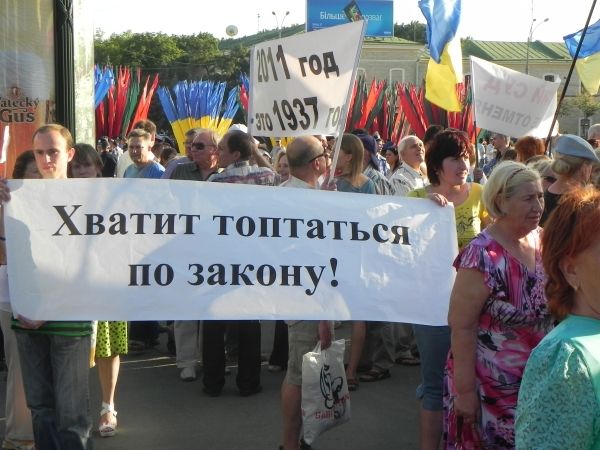