After 11 on Wednesday evening around 10 police officers, together with a court bailiff, appeared at a picket at Freedom Square in the centre of Kharkiv.  The picketers had set up tents and were planning an indefinite protest in support of fired trolleybus drivers. .

They were dispersed and the tents dismantled on the basis of a court order issued by the District Administrative Court (Judge Chaly) banning the picket.  The ban was explained as being because the picketers had supposedly not coordinated their actions with other members of the territorial community, were hampering transport (they were picketing in a Square where there is none) and were supposedly (in the same Square) less than 20 metres from a metro exit.

An appeal against the court ban was lodged immediately.  This did not stop the police from arriving almost immediately.

Witnesses say that the police tried to force Sergei Chetverikov, the person who signed the notification of the plan to hold a protest, into a police car, and Denis Kornyev, a journalist from the newspaper Nasha Zhyzn [Our Life] went to his defence. According to the picketers, the police major in charge used hand-to-hand fighting techniques against the journalist inflicting serious injuries. An ambulance was called, and he was taken to hospital. He proved not to have concussion, as originally suspected, but the doctors found numerous injuries.  He has been discharged from hospital.

Other picketers recognized the police major as being Vladimir Chuhayevsky, the Head of the Public Order Department of the Dzerzhynsky District Police.  He is also known for his active part in the violent dispersal of peaceful protest against the quite illegal felling of trees in Gorky Park in May and June 2010, for which he did receive a formal reprimand.

From reports here and earlier in the day, as well as .  Photos from Glavnoye 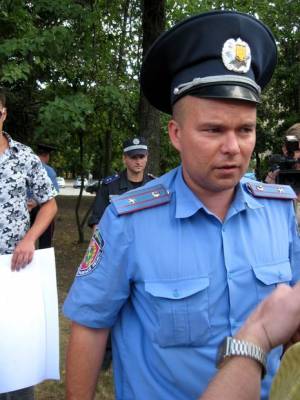