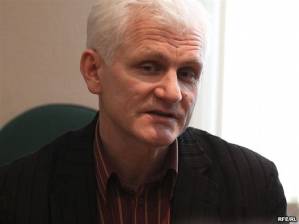 Ales Byalyatski’s arrest in Belarus last week on suspicion of tax evasion drew international condemnation. But it’s since emerged that members of the European Union helped the case against him by providing the authorities in Minsk with his banking information.

Lithuania has already apologized to the family of Byalyatski, who heads Vyasna, one of the most prominent human rights groups in Belarus. Now Poland -- which has been a staunch defender of opposition groups in Belarus -- has admitted it also divulged information about bank accounts in his name.

"I’m sorry on behalf of the republic, " he wrote on Twitter, calling the disclosure a "reprehensible mistake" and vowing to redouble efforts to support democracy in Belarus. He said Belarus had "taken advantage" of international counterterrorism procedures to request information about Byalyatski.

Earlier, the Foreign Ministry said the information was given over by the Prosecutor-General’s Office, after the ministry had advised government agencies against doing so. By way of explanation, ministry spokesman Marcin Bosacki told RFE/RL’s Belarus Service that the prosecutor-general was "not under the government’s authority."

The Prosecutor-General’s Office said it’s conducting an internal investigation into who released the information to Belarus.

The news is an embarrassment for Poland, which currently holds the EU’s rotating presidency and has sought to play a leading role in advocating democracy and shaping policy toward the EU’s former Soviet eastern neighbors.

In the Czech Republic, a spokesman for the Foreign Ministry denied reports that Prague also gave Belarus information about Byalyatski’s bank accounts, but said the government is still investigating possible leaks.

Amnesty International has declared Byalyatski a prisoner of conscience. He faces up to seven years in prison and the confiscation of his assets.

His arrest is part of an ongoing crackdown against critics of authoritarian President Alyaksandr Lukashenka following his third reelection in December to another four-year term. Police beat and arrested some of the more than 10, 000 people who took to the streets after voting many believe was rigged.

In Minsk, news of the Polish leak drew outrage among the human rights community.

Speaking to RFE/RL’s Belarus Service in Minsk, a member of Byalyatski’s Vyasna group, Uladzimir Labokovich, called it a "betrayal and complicity in the political repression in Belarus."

"It completely devalues all statements about commitment to democracy and the fundamental positions of some Polish politicians on the Belarusian regime, " Labokovich said.

Viktar Karnienka of the For Freedom movement said it was hard to believe the Polish move was accidental.

"The majority of bureaucrats in new EU countries have forgotten [what kind of regimes] they used to have and at what cost [they were brought to an end], " Karnienka said. "It’s very frustrating."

On August 11, the government said Lukashenka had pardoned nine of the 41 people convicted for taking part in the protests. However, a spokesman for Lukashenka told RFE/RL’s Kazakh Service that the government would not name those released.

Among arrested opposition leaders is Andrey Sannikau, Lukashenka’s closest rival in the election. He was sentenced to five years in prison in May.

News of the amnesty came shortly before the United States announced on August 11 that it would impose new sanctions against Belarus. State Department spokesperson Victoria Nuland said the action was taken against four companies.

"The sanctions are a response to the continued incarceration of political prisoners and the crackdown on political activists, journalists, and civil society representatives, " Nuland said.

The EU and United States previously introduced sanctions including travel restrictions against Lukashenka and other officials.