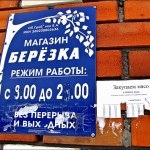 In the last years of the Soviet regime, hard currency shops sold just about anything in short supply which included the books of Solzhenitsyn, Grossman and other sources of truth about the regime.  Hard currency was needed and the shops kept westerners from asking inconvenient questions.

The decision to launch a Euronews Ukrainian Service on 24 August 2011, the twentieth anniversary of Ukraine’s Independence, was a clear marketing move.  However with respect to the upbeat promises from their Ukrainian partner, the state-owned National Television Channel of Ukraine, and its First National Channel - UTV-1, of “an important breakthrough into the European information realm” caution is warranted.

Euronews has a name to defend and is likely to avoid news reports demonstrating clear bias or propaganda.   It should, however, have considered this back in October 2010 when it signed a deal with UTV 1 for a 24-hour Ukrainian version of Euronews.  Over previous months there had been plenty of worrying reports about recent changes in news coverage, disappearance of analysis and muffling of information inconvenient to the new regime.  UTV-1, together with Inter, the TV channel owned by the Head of the Security Service, Valery Khoroshkovsky, regularly topped the anti-ratings issued for news coverage most often in breach of journalist standards.

In July 2010 UTV-1’s Director, Yegor Benkendorf produced an overtly hagiographic film about President Yanukovych for the latter’s reportedly spectacular 60th birthday festivities.  In the same month Benkendorf’s Deputy, Valid Arfush stated in a widely-publicized interview that in his view “UTV-1 must be pro-government” and should provide only “positive coverage” of the regime.

And in October Arfusz was made Chair of the Coordination Council for Ukrainian Euronews, while Benkendorf became one of the members, together with Michael Peters and Philippe Cayla from Euronews.  Judging from the assurances made by UTV-1 and Valid Arfusz about total objectivity and a European level of news coverage, it is likely that the UTV-1 heads preferred not to share their highly specific view of the role of the taxpayers’ television channel with the Euronews management.  It would also seem that the latter were happy to not notice what should have hit them in the eye, namely the gaping divide between fine words and reality.

Recent criticism of the failure by virtually any TV channel to provide analysis of the Tymoshenko trial and her arrest on 5 August is certainly valid yet what was in shortest supply was perhaps more fundamental.  Most of the news was quite simply missing. The taxpayers’ channel did not report even one of the statements of concern issued first by the Polish MFA, then by a number of other foreign ministries; by the President of the European Parliament, spokespeople for the EU and the US State Department, then by the PACE Co-Rapporteurs on Ukraine, Ukraine’s first President Leonid Kravchuk and many others.  All of these messages were short and eminently clear: Tymoshenko’s arrest and the prosecutions in general of former government officials appear politically motivated and suggest selective application of the law. . There were equally unveiled warnings as to the consequences of persecution of the opposition for Ukraine’s European prospects, foreign investment and role in the international community. .

Such a flood of unequivocal statements from professional diplomats and merciless verdicts regarding Yanukovych’s motives and Ukraine’s slide towards authoritarianism in most major world publications were in themselves news. Not on UTV-1.

You can’t muffle all information and Tymoshenko’s arrest was even UTV-1’s first news story on Friday 5 August. It began by stressing, via video footage and commentary, her disruptive lateness.  Broadcast of part of her response to journalists prior to the arrest is followed by clips of first, the Prosecutor, then the Vice President of something called the Association of Law Firms of Ukraine who says that there’s nothing unusual in the detention. His view that detention, effectively for “bad behaviour”, is quite lawful is categorically not shared by the above-mentioned foreign ministries and international bodies, not to mention most Ukrainian legal commentators whose voices were also not heard on UTV-1. .

On 6 August we learn that the opposition wants to call an emergency session of parliament because of the events of 5 August. We are informed how many votes they need, nothing more.  The report ends with the words that “Tymoshenko’s associates” are protesting against her arrest

The fact that it is by no means only her “associates” who have reacted with criticism can be read between the lines in the next item where Ukraine’s Foreign Ministry asks the European community not to “over-estimate” the new restraint measure against Tymoshenko.  We are told only that “some European countries have called on Kyiv to ensure a fair and independent trial of Tymoshenko” and that the authorities “are not interfering in the trial and hope that Tymoshenko’s arrest will not influence Ukraine’s relations with the EU”.

No comment about the authorities’ interference, but that of UTV-1 is more than evident. Lest anybody should stop to ask inconvenient questions about this curious report, we are immediately assured of Prime Minister Azarov’s “conviction” that “Ukraine will be in Europe” and that “this depends on Ukrainians themselves”.

There is obviously no mention of the well-founded suspicion that a great deal in Ukraine, including its “European choice”, is dependent on particular Ukrainians. There is silence also about the intensive activity of courts around the country in banning peaceful demonstrations and the even more active role played by the Special Forces Berkut officers in crushing peaceful protest.

Would Euronews call this adequate coverage?  The question is purely rhetorical.  We can assume that Euronews itself will not lower its standards of coverage.  However a channel which is available to a very limited percentage of the Ukrainian public could, just like the hard currency shops of Soviet times, conceal the real situation.  This would mislead the West while for most Ukrainian TV viewers publicly important information would remain in short supply.

Euronews can make a difference.  Not by providing democratic gloss, but by insisting that the channel they are now closely associated with stops violating the fundamental right of Ukrainian citizens to information and freedom from manipulation.

Their reputation is also at risk, and we need to make sure that they know it.

Illustration (of a “Beryozka” or hard currency shop)  from  muph.livejournal.com