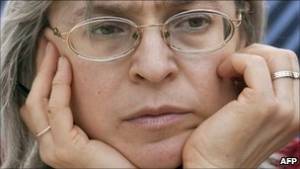 A Russian former senior police official has been arrested in connection with the murder of campaigning journalist Anna Politkovskaya in 2006.

The man suspected of fatally shooting her, Rustam Makhmudov, was arrested in May in his native Chechnya.

No one has been arrested for ordering the murder of Politkovskaya, an outspoken critic of the Kremlin.

Lt Col Pavlyuchenkov was paid "by a person whose identity is still unknown" to organise the killing, Investigative Committee spokesman Vladimir Markin was quoted as saying by Russian news agencies.

He formed a group to carry out the killing and provided the gunman with a weapon, Mr Markin said.

Anna Politkovskaya was an investigative journalist who wrote highly critical reports of the Kremlin and of Russian military actions in Chechnya. She was also critical of the pro-Moscow authorities in the southern Russian republic.

On 7 October 2006, she was found shot dead in a lift at her block of flats. The 48-year-old was working for a small-circulation Russian newspaper, Novaya Gazeta, known for its fierce attacks on the country’s authorities.

Rustam Makhmudov was arrested in Chechnya in May, suspected of being the trigger man.

His two brothers, Dzhabrail and Ibragim, have been accused of acting as drivers at the scene of the crime while former police officer Sergei Khadzhikurbanov has been accused of providing logistical support.

All three men were tried and acquitted for lack of evidence in 2009 but the verdict was overturned by Russia’s supreme court, which ordered them to be retried.