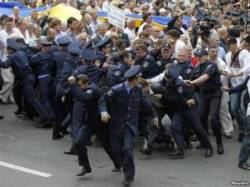 Many thousands took part in the opposition march on Independence Day which began at the Monument to Taras Shevchenko at dinnertime. The marchers were then stopped by cordons of police and Special Force Berkut officers on the way to Bankova St [the President’s Administration].  There were scuffles during which the police used tear gas. Later the police prevented the protesters from moving in the direction of Maidan Nezalezhnosti [Independence Square where a concert for Independence Day was taking place and to the Lukyanivsk SIZO to show support for the former Prime Minister, Yulia Tymoshenko who has been remanded in custody since 5 August.

The District Administrative Court on Thursday banned protests in the centre on Independence Day, allowing the protest only in Shevchenko Park and Volodymyrska St. However the police did not let anything into the park until the President and members of the government had placed their flowers at the Monument to Taras Shevchenko.

After people were allowed in, after 11.00, it transpired that the police had detained the car carrying the sound equipment. Court bailiffs also turned up and informed that the court had prohibited protests on Volodymyrska St as well.

Despite the obstructions, a gathering [viche]  of the Committee against Dictatorship took place in Shevchenko Park with the involvement of 12 political parties. According to opposition estimates there were 10 thousand people present; the police said 3 thousand and Associated Press – 5 thousand.

The parties agreed a joint memorandum which demands among other things “early elections (presidential, parliamentary, to the Kyiv Council and for Kyiv Mayor); a stop to illegal criminal prosecutions and the immediate release of Yury Lutsenko; Yulia Tymoshenko; and other political prisoners”

The viche planned to pass the memorandum to the President’s Administration, however they were confronted on Volodymyrska St by two rows of police officers. On of the National Deputies present tried to persuade the enforcement officers to let the march through, but to no avail. They then tried to storm the police cordon, knocking down about 5 officers. The police used tear gas and batons against them.  The police report later denied that tear gas had been used. It said that 6 officers had been injured and asserted that the protesters had hurled heavy objects at them. The police say that all offences were recorded and will be investigated by the Prosecutor General’s Office.