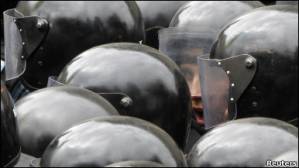 The Ministry of Internal Affairs [MIA] investigation department has initiated a criminal investigation over the events in the centre of Kyiv on Independence Day (24 August). According to the Kyiv Prosecutor’s Office, the criminal file has been opened over hooliganism.

“Despite an order from the District Administrative Court in Kyiv banning gatherings, rallies, demonstrations for 24 hours in the central part of the capital, the participants in political protests tried to break through police cordons on Volodymyrska St, ignoring the demands from the police that they stop”, the report states. It claims that six police officers were injured.

Earlier the MIA had stated that the police had not recorded any serious offences on 24 August, though it did say that there were “some incidents”.

Their report on Thursday morning said that the law enforcement agencies were collecting information about infringements of legislation, including in Kyiv, which would be passed to the MIA or Prosecutor’s investigators.

On Thursday the media reported the MIA management as saying that they could not exclude criminal proceedings being initiated against the Deputy Leader of the Batkivshchyna Party, Oleksandr Turchynov. [the party of which former Prime Minister Yulia Tymoshenko is leader].

On the eve of Independence Day, the courts in Kyiv and a number of other cities banned any demonstrations, other than official ones, in the centre.

In Kyiv this was explained as being due to the large number of notifications from different parties.  The Head of the Kyiv State Administration, Oleksandr Popov stated that if they let them all gather, there’d be no room for the State festivities.

Details of the confrontation between police and people endeavouring to march peacefully to the President’s Administration can be found here.

Batkivshchyna is adamant that the protesters did not act in breach of the law or Ukraine’s Constitution. They had been trying to get to the President’s Administration to hand a memorandum calling, in particular, for the release of Yulia Tymoshenko, Yury Lutsenko and other officials from Tymoshenko’s government.  The march was under the banner “Freedom for Political Prisoners!”

From a report on the