According to BYUT National Deputy [MP] Andriy Pavlovsky, the police have summoned 18 National Deputies for questioning regarding the events in Kyiv on Independence Day.  Mr Pavlovsky said that other preople who were present at the protest on 24 August have also been summoned.

Mr Pavlovsky mentions that they have even summoned Levko Lukyanenko, former National Deputy and former political prisoner. Mr Lukyanenko spent 27 years altogether in Soviet labour camps.  In 1976, despite having only recently been released, he agreed to begin one of the founding members of the Ukrainian Helsinki Group, for which he again paid the price of his personal liberty.  Levko Lukyanenko is 83 years old.

Andriy Pavlovsky calls the police summons “deliberate provocation aimed at creating conflict and intimidating active citizens so that they won’t wont’ to take part in protests when in September parliament begins adopting laws against the people”.

The Head of the Kyiv MIA Public Liaison Department, Volodymyr Polishchuk earlier confirmed that the deputy leader of Batkivshchyna – BYUT [BYUT is the coalition in parliament], Oleksandr Turchynov has been summoned “for the moment as a witness as one of the organizers of this event. He gave the protesters the order to move in a column to Bankova St [the President’s Administration] violating the court order”.

With respect to the court order, judging by reports in the media, there was clearly confusion with it reported as banning certain streets but NOT Volodymyrska St where the confrontation with police occurred.

As reported, many thousands gathered at an opposition rally on 24 August at the Monument to Taras Shevchenko in Kyiv.  A large number of the protesters began making their way along Volodymyrska St towards the President’s Administration.

Various reports, including that by Serhiy Leshchenko at Ukrainska Pravda, say that the court order ended with a list of the specific restrictions proposed, suggested  changing the time of the demonstration in Shevchenko Park to 12.00, and the route the marchers follow to include Volodymyrska St.

The marchers were met by cordons of police and Special Force Berkut officers, at least one of whom used tear gas.

The protesters were taking a joint memorandum agreed at the rally organized by the Committee against Dictatorship . It demanded,  among other things,  “early elections (presidential, parliamentary, to the Kyiv Council and for Kyiv Mayor); a stop to illegal criminal prosecutions and the immediate release of Yury Lutsenko; Yulia Tymoshenko; and other political prisoners” 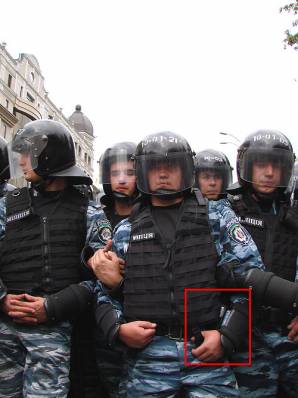