The Shevchenkivsky District Court in Kyiv has jailed for 10 days the woman who on 24 August, according to information from opposition party sources, in protest against political repression, cut the President’s name off the ribbon on the wreath which read “To Taras Shevchenko from Viktor Yanukovych”.

The Head of the Kyiv Police Public Liaison Department, Volodymyr Polishchuk, the court sentenced the woman to 10 days administrative arrest under Article 173 of the Code of Administrative Offences (petty hooliganism).  Mr Polishchuk asserts that it was not just the ribbon that prompted such a sentence.

“There were also insults. I saw that video, she did not simply cut the ribbon and go away. This was a protest action carried out with insults and descriptions of this regime”.

The Kyiv Police informed on Monday evening that 2 people had been detained over the protests on 24 August, (over alleged acts of hooliganism) then on Tuesday it was announced that they had been released on a signed undertaking not to abscond.

“Bearing in mind the fact that a flagrant infringement of public order took place over clear disrespect to the public (inappropriate slogans; calls to disobey the demands of the court and so forth), and was connected with showing resistance to representatives of the authorities who were carrying out their duty to protect public order, in accordance with the above-mentioned article, the activists could be imprisoned for a period from two to five years”, the MIA statement read.

The MIA is continuing its investigation into what it deems acts of hooliganism by protesters. 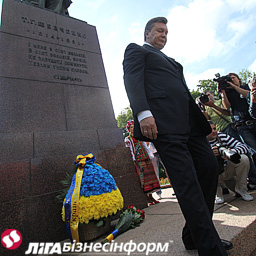