Beslan Six years on100 lessons on BeslanRemembering BeslanOn the Fifth anniversary of BeslanFamilies of Beslan14 years of pain and of lies about the siege and storming of School No. 1 in BeslanRussia found in violation of the right to life over Beslan School attackBeslan: No Answers, Only Prosecution of Slain Victims’ Mothers Who Dared to ProtestBeslan: 11 years without answersCourt in Strasbourg accepts case against Russia over BeslanBeslan: Russia finally forced to answer before the European Court of Human RightsMothers of Beslan seek answers through StrasbourgRemember BeslanTruth about Beslan blockedBeslanBeslan: Eight years on, still no answersBeslan: four years and no answersCriminal investigation initiated against members of “Voice of Beslan”“Voice of Beslan” will not be silenced«Voice of Beslan: Only the truth»
• Topics / News from the CIS countries

Beslan: In Memory and Mourning 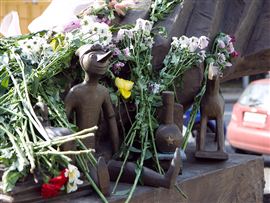 It is the seventh anniversary today of the terrorist seizure of School No. 1 in Beslan. Remembrance ceremonies have been taking place in the North Ossetiyan town where during the storm by federal troops on 3 September 331 people died, over half of them children.

The school was seized during the “First Bell”, the festive event to mark the youngest children’s very first day at school. It is traditionally attended by parents and grandparents.

There were well over a thousand people at the school, not the very much smaller number claimed by the authorities.  When Moscow asserted that the terrorists were refusing to negotiate, the terrorists, in anger at what they said was another lie, refused to give the children held in the sports hall, water.

The parents and other relatives of those who died have been trying for 7 years to learn the truth about the events of those days, why tanks and heavy artillery were used against a school, who set off the explosion that supposedly prompted the storm, etc.

The photo is from the Radio Svoboda Russian site