German Chancellor expresses concern over trials of former government membersEU Official assured that Tymoshenko will not be stopped from standing for political officeTymoshenko not allowed to receive guests from Europe in SIZOTymoshenko Trial Delay Seen As Favor To EUU.S, EU press Ukraine; Tymoshenko trial delayedEU concerned about parliamentary elections without TymoshenkoTop EU official warns of problems if the Tymoshenko situation remains unchangedJudge accused of restricting Tymoshenko’s defence caseHanne Severinsen expresses concern over Tymoshenko trial and arrestEU says Tymoshenko trial could block Ukraine dealVaclav Havel, Desmond Tutu & Others: Ukraine loses its wayNew refusal to releaseTymoshenko despite statements from Poland, Havel and othersJudge Kireyev now threatens to eject journalists who asked him to speak upPoland: Tymoshenko arrest and trial an obstacle to EU integrationYulia Tymoshenko’s Lawyer: File Material shrunk by 200 pagesOn the Court Ruling changing the Restraint Measure against Yulia TymoshenkoAll thrown out of Yury Lutsenko’s tiral for laughingKireyev throws out one of Yulia Tymoshenko’s lawyersOmbudsperson: Tymoshenko has the right to see a doctor she trustsEU Representative seeks permission to visit Yulia Tymoshenko
• Topics / Politics and human rights
• Topics / The right to a fair trial 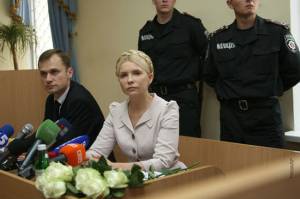 The main issue which most interested almost all participants in the 8th annual conference in Yalta organized by the Foundation of Viktor Pinchuk, one of Ukraine’s richest men, was not on the agenda for the first day of the meeting on Friday.  However, from the first minutes of the meeting it became clear that the issue of former Prime Minister Tymoshenko’s detention could not be avoided.

Mario David, MEP from the European People’s Party which supports Tymoshenko’s party, began with an uncomfortable question for President Yanukovych. He said that “the Tymoshenko case is breaking Europeans’ hearts” to which Yanukovych replied that he shared this pain and added that they were dealing with an investigation into the circumstances of the signing of gas accords back under Viktor Yushchenko’s presidency.

“The story which is unfolding now is not a story of the present day, but of 2009. This is a story of the signing of a contract by management players who did not have that right. They violated international agreements and exceeded their powers. The assessment of this was given by President Yushchenko who signed the decree after a meeting of the National Security Council”.

“We in Europe do not understand what is happening. After the Orange Revolution there was a lot of talk about Ukraine, and then it stopped. Now Ukraine is again on the agenda in connection with dubious events – the arrest of Yulia Tymoshenko. We are following events”.

Ukraine is hoping to finalize the agreement with the EU on a free trade zone by the end of this year. The Ukrainian MFA says that all is going according to plan, however Swedish Minister of Foreign Affairs, Karl Bildt has said that Ukraine has received a serious signal.

“Ukraine has a problem which needs to be resolved. Tymoshenko is being tried under laws which do not exist in any European country. Such laws should not exist in Ukraine either”. Mr Bildt also stated that one of the topics discussed at the meeting with Viktor Yanukovych was the adoption of amendments to the Ukrainian Criminal Code.

As reported, EU enlargement commissioner Stefan Fule also had a several-hour long talk with President Yanukovych and stated afterwards that there could be adverse consequences for Ukraine if Tymoshenko is imprisoned.

“I think the feeling in Brussels is that if Ukraine does not observe democratic values, if the former Prime Minister is imprisoned under an article of the Criminal Code written back in Soviet times, then the relationship will hardly be the same between the EU and Ukraine."

President of the Brookings Institution, Strobe Talbott told the BBC Ukrainian Service that now decisive steps were expected from Yanukovych although the President has on many occasions stated that the case is not political and he cannot influence the court. Mr Talbott stressed that the trial of Tymoshenko was spoiling relations both with Europe and with the USA. It was a serious move in the wrong direction, he said, and added that when an MEP had said that day that Europeans’ hearts had been broken over the trial of Tymoshenko, most of those present had felt the same pain and sympathized.