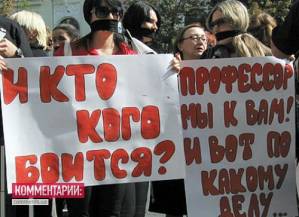 A picket was held on Monday outside the Mayor of Kharkiv’s office by members of TV ATN, unlawfully removed from air last week.

Around a hundred people gathered, with other Kharkiv journalists, human rights activists and members of the public coming to support the channel.

The picketers held placards reading: “Who’s scared of whom?”’ “News without additions” and “News diet from the Mayor”.  All the journalists were gagged with black ribbons.

A platform was erected outside the Mayor’s Office from which news reader Oleksandr Tykhonov read out the latest news release.

The picketers also brought a symbolic coffin for freedom of speech to the Mayor, Gennady Kernes.