The Independence Square protest on 15 September: a human rights perspective 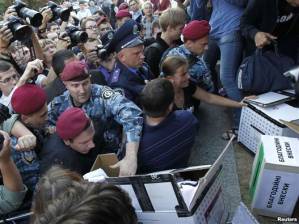 As reported, on 15 September 2011 a protest on Maidan Nezalezhnosti [Independence Square] in Kyiv ended in a scuffle with police.  Mykhailo Kamenyev, a member of the Public Committee under the MIA, and specifically its Commission on Freedom of Peaceful Assembly was present at the event and considers that there needs to be a proper legal assessment given to what took place.

He points out that the official police reaction spoke of the event as “an advertising-charity action in an unspecified place”.  The MIA Press Service claims that the participants were warned that the action was unlawful and were asked to stop. The request, they say, was ignored and therefore “police officers stopped the unlawful actions and removed around thirty one advertising items”. In a separate part of the report, the MIA states that notification was submitted to the Kyiv City State Administration on 14 September regarding an action on Independence Square from 18 to 21.00 on 15 September.

The report given at the time stated that during a protest action on Independence Square, officers from the Special Force Berkut police unit removed T-shirts with the caption “Thank you residents of Donbas” [the present regime is closely associated with the eastern Donbas region, especially Donetsk – translator].  Journalists were informed of this by the head of ProstoPrint which printed the captions, Denis Oleinykov.

“We gathered here for an agreed protest action which was approved by the Kyiv City State Administration.  The action planned to acquaint people with the creative output of young Ukrainian designers who are critical of the present regime’s actions”, he explained.

According to Mr Oleinykov, the organizers showed their documents on arrival to the police and no questions arose. Then, 20 minutes later, a police officer turned up and said that the T-shirts could be shown, but not sold. Therefore the organizers set up a box for donations – anyone wishing to receive a T-shirt could offer their contribution. “At exactly 6 o’clock, Berkut arrived and without any explanation of the reasons took away the T-shirts, tried to take away the box with donations and took them away in an unknown direction”.

Mykhailo Kamenyev considers the legal aspects of the situation

The organizers of the protest complied fully with Article 39 of Ukraine’s Constitution by submitting notification of a planned peaceful gathering.  A copy of the notification was given to police officers.

There is no information about any court order banning the event. The participants gathered peacefully, without any weapons, did not obstruct traffic or infringe public order.

Their aim was to draw attention to the situation which had developed around the firm ProstoPrint.  The participants planned to hand out T-shirts and collect donations.  De jure no case of sale of any products was recorded.

The description by the police of the action as an “advertising charity action” arouses only bemusement since there is no such concept in current legislation.

Nor do either the Constitution or the European Convention on Human Rights provide the state with the right to draw up a list of “established” places for holding peaceful gatherings.

Mykhailo Kamenyev stresses that the police statement that the action “can formally be views as unlawful sale of goods” is unacceptable value judgement.  No sale was recorded, and the action must be viewed from a legal point of view, not “formally”.

The police statement that the stated aim did not match the actual aim is also unacceptable since any meetings can only be banned or restricted by a court order.

The police deny that any measures of force were applied.

Mykhailo Kamenyev notes that according to TVi at the beginning of the action around 10 police vans arrived.

Warning that force would be used was given by a police officer only to the action organizers, and the participants heard nothing, nor were they given sufficient time to leave.

He adds that it is quite clear, from witnesses, journalists, participants in the protests, as well as photos and video footage, that force was applied, making the denial by the MIA knowingly false. “Beating by Berkut officers of protesters was recorded, of journalists; there were attempts to detain people unlawfully, to obstruct journalists in their work and damage of a cameraman’s equipment. The force was aimed at stopping the collection of donations and removal of the T-shirts.

The following also constituted violation of freedom of peaceful assembly:

Berkut officers divided the participants into two groups in order to avoid distribution of the T-shirts and collection of donations;

Berkut officers confiscated a number of T-shirts using force to do so.

Berkut officers, while taking away the confiscated T-shirts drove off participants and journalists, damaging the photographic equipment of a cameraman from the publication Komentari

There were over 30 Berkut officers involved. The partial blocking of transport after the scuffle began was initiated by the police.

The author points out that the slogan “Thank you, residents of Donbas!” is a purely ironic response from society to the present regime.

In concluding, the author points to the key features:

-          notification about the planned action had been provided and all formal procedure carried out;

-          people gathered peacefully, without weapons and did not obstruct traffic;

-          the demand from the police to stop the protest was therefore unlawful.  They can be described as exceeding ones powers and unlawfully obstructing the holding of a peaceful gathering.

-          There was also not sufficient warning for such intervention by the police;

-          Force was applied against unarmed individuals who were not showing resistance or infringing public order. It was clearly disproportionate.

-          Force was also applied against journalists carrying out their work.  This can be considered obstruction of a journalist’s professional work (Article 171 of the Criminal Code as well as exceeding their powers (Article 365).  The latter article applies also to the removal of T-shirts

Mykhailo Kamenyev recommends that the organizers and participants in the events of 15 September take the MIA to court, and make complaints to the Prosecutor’s Office and the Human Rights Ombudsperson.  He makes other recommendations including an open official investigation, a thorough check by the Prosecutor’s Office.  He also recommends that Tomas Hammerberg, Council of Europe Human Rights Commissioner draw attention to the incident as won which is the first step towards further reduction of the freedom of expression.  He suggests that a number of other western organizations do the same, as well as diplomatic representations, etc in Kyiv.