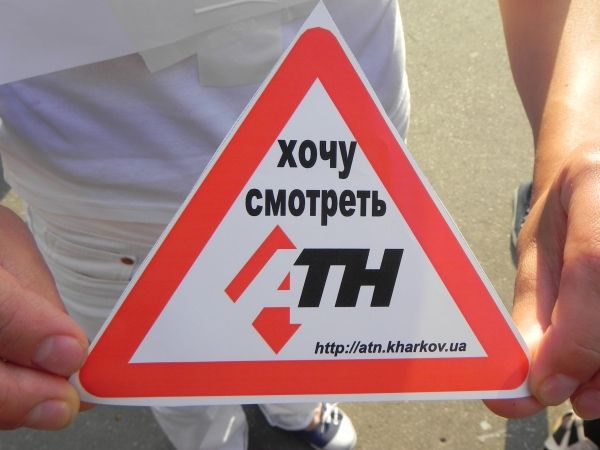 "U want to watch ATN"

A delegation of National Deputies, journalists and representatives of international bodies is heading to Kharkiv on 27 September and plan to discuss with Mayor Kernes the removal from air of three local TV channels.

ATN, the news channel which was first to be closed, followed by Fora and A/TVK, reports that the delegation will include MPs Andriy Shevchenko [Head of the Parliamentary Committee on Freedom of Speech, BYUT], Olena Bondarenko [from the same Committee, Party of the Regions]; journalists from ICTV, CTB, the BBC Ukrainian Service, Kyiv Post, Telekritika, Internews, the Media Law Institute, the civic movement Stop Censorship, Reporters without Borders, representatives of OSCE and the EU in Ukraine.

The members of the delegation plan to meet with Kernes at around 15.00, then hold a roundtable with journalists, civic organizations and deputies regarding the removal from air of the three channels.

ATN reports also that the Prosecutor’s Office is now investigating.

Protests over the removal from air of the three channels have come from Ukrainian journalist unions, the Ukrainian Helsinki Human Rights Union, Kharkiv Human Rights Group, OSCE Media Representative and others.

The Independent Media Union of Ukraine has stated that there “are grounds for believing that this media outlet was closed because of Mayor Gennady Kernes’ dissatisfaction since the latter has on a number of occasions publicly expressed indignation over criticism of his activities in the programmes of the TV companies. … It considers the blocking of the Kharkiv media outlets to be a flagrant attack on freedom of speech in order to deprive Kharkiv residents of a critical view of the activities of the authorities.”

The Union endorses the stand taken by the Ukrainian Helsinki Human Rights Union in calling for the reinstatement of the TV channels ATN, Fora and A/TVK, after which issues in dispute can be resolved.