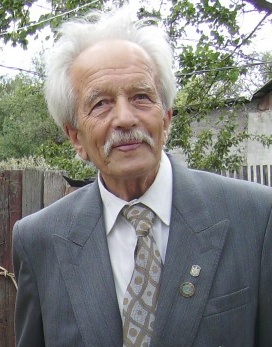 The death has been announced of Yaroslav Homza. The former dissident, who spent 15 years in the camps, fighter for Ukraine’s independence, as well as one of the founding members of the Donetsk regional branch of the Ukrainian Helsinki Union, died on  21 September in Ocheretyno (Donetsk region) following a serious illness. He had turned 84 just three days before.

Yaroslav Homza was born on 18 September 1927 in the Lviv region. His family who were peasants was extremely poor.  In 1942 he and his father were forced to “voluntarily” go to Nazi Germany for work.

He was arrested by SMERSH officers and sentenced under Article 58 – 1 of the Russian SSR to 10 years imprisonment and 5 years deprivation of rights for “anti-Soviet activities” (circulating Ukrainian press and books among Ukrainian ostarbeiter and for links with OUN [the Organization of Ukrainian Nationalists].

He arrived in the Donetsk region in 1955 where his parents had moved to. He worked at various jobs, and was permanently under KGB surveillance.

He was active in the Ukrainian renaissance which accompanied perestroika. He was one of the organizers of the Shevchenko Soviet for the Ukrainian Language in the Donetsk region; the All-Ukrainian Society of Political Prisoners and Victoms of Repression and in 1989 was a co-founder of the Ukrainian Helsinki Union. He was also the head of the local branch of OUN