Tymoshenko trial jeopardises Ukraine trade deal, warns EUEU warns against selective use of justice with respect to members of the oppositionTrial of Yulia Tymoshenko dominates at YaltaGerman Chancellor expresses concern over trials of former government membersEU Official assured that Tymoshenko will not be stopped from standing for political officeTymoshenko not allowed to receive guests from Europe in SIZOTymoshenko Trial Delay Seen As Favor To EUU.S, EU press Ukraine; Tymoshenko trial delayedEU concerned about parliamentary elections without TymoshenkoTop EU official warns of problems if the Tymoshenko situation remains unchangedJudge accused of restricting Tymoshenko’s defence caseHanne Severinsen expresses concern over Tymoshenko trial and arrestEU says Tymoshenko trial could block Ukraine dealVaclav Havel, Desmond Tutu & Others: Ukraine loses its wayNew refusal to releaseTymoshenko despite statements from Poland, Havel and othersJudge Kireyev now threatens to eject journalists who asked him to speak upPoland: Tymoshenko arrest and trial an obstacle to EU integrationYulia Tymoshenko’s Lawyer: File Material shrunk by 200 pagesOn the Court Ruling changing the Restraint Measure against Yulia TymoshenkoAll thrown out of Yury Lutsenko’s tiral for laughing
• Topics / Politics and human rights
• Topics / The right to a fair trial 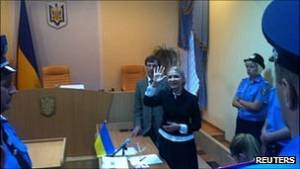 Mrs Tymoshenko was remanded in custody after mocking the trial

Prosecutors have asked for former Ukrainian Prime Minister Yulia Tymoshenko to be jailed for seven years over a gas deal with Russia. She is accused of having exceeded her authority while negotiating the 2009 agreement, which critics say was to Ukraine’s disadvantage.

She again rejected the charges when her trial resumed on Tuesday, calling it an "absurd show".

Both the US and EU have voiced concern over the legitimacy of the trial.

However, former President Viktor Yushchenko and others have testified against her. Mrs Tymoshenko has been held in custody for contempt of court since 5 August.

In another development, current Ukrainian Prime Minister Mykola Azarov said Russia had agreed to revise the gas contract but Russia’s gas monopoly, Gazprom, said no new deal had yet been struck.

Mrs Tymoshenko’s trial had been adjourned on 12 September as the US and EU questioned the validity of her prosecution. It has been reported that they have put pressure on Ukraine to release her and let her compete in elections next year.

"If this issue is not being solved and if she indeed is put in prison... it would be problematic, " said European Union Enlargement Commissioner Stefan Fule during a visit to Ukraine this month - effectively warning that its hopes of further integration with the EU would suffer.

As on previous occasions, Mrs Tymoshenko’s latest trial appearance drew a crowd of supporters on the streets outside.

The one-time Orange Revolution leader insists she is the victim of a vendetta by President Viktor Yanukovych, who defeated her at the 2010 presidential election.

But Viktor Yushchenko, the other leading figure of the Orange Revolution and an old opponent of Mr Yanukovych, testified in court that the 2009 contract had been a "political" deal which continued to inflict economic damage on Ukraine.

"Russia needed an obliging leader, " he said, speaking at the trial on 17 August.

Russia pipes gas to western Europe across Ukrainian territory and relations between the two ex-Soviet states have long been dogged by disputes over transit fees and unpaid bills.

Ukraine is set to pay about $400 (£260) per 1, 000 cubic metres of Russian gas in the fourth quarter of this year, at a price linked to global oil and oil product prices.

Under the 2009 deal, Ukraine must also import no less than 33bn cu m of gas from Russia, and Kiev wants to reduce both the price and the volume of imports.

Moscow is believed to be trying to tie Ukraine into a Russian-led customs union.