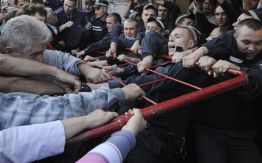 Brussels has voiced concern in connection with former Ukrainian Prime Minister Yulia Tymoshenko’s trial and recalled that the basis for future relations is respect for democratic principles and the rule of law.

"Earlier this month I conveyed a strong message to Ukraine, which stressed that respect for democratic principles and the rule of law, including the right to fair and independent legal processes, must remain the basis of our future relations, " EU High Representative for Foreign Affairs and Security Policy and Vice President of the European Commission Catherine Ashton said on Tuesday in Strasbourg during the plenary session of the European Parliament.

According to Ashton, it remains vital for the EU to help its neighbors in their process of transition towards sustainable democracy and to becoming market economies.
"This process is in our interests since it enhances our own security and prosperity. In Poland, we will leave our partners in no doubt that the EU’s acknowledgement of their European aspirations and their European choice goes hand in hand with our expectations for their commitment to progressing towards deep and sustainable democracy, " she stressed.

The high representative noted that she and European Commissioner for Enlargement and European Neighborhood Policy Stefan Fule were particularly concerned about the cases against Tymoshenko and other members of her government, and plans to revert to earlier electoral system, against international advice.