EU following struggle for freedom of speech in KharkivProtests, delegation, letter to the President , yet ATN remains off airKharkiv Mayor awaits unpleasant questions about closure of TV channelsYoung Kharkiv residents demand the return of TV ATNOSCE calls on Ukrainian government to allow independent Kharkiv broadcaster back on airThe Removal from air of three Kharkiv channels damages Ukraine’s reputationKharkiv’s TV ATN files law suit against Sanitary ServiceAfter Kharkiv’s TV ATN who’s the next target?ATN journalists picket Mayor of Kharkiv’s officeMedia Union calls for resumption of broadcasting of blocked Kharkiv TV companiesOn Flagrant Violation of Freedom of Expression in KharkivATN to picket the Kharkiv Mayor’s Office after being taken off airKharkiv journalists call for defence of freedom of speechOn the removal from air of A/TVCATN TV channel accuses Kharkiv Mayor of obstructing its right to broadcastJoint statement on threats to media freedom in UkraineARTICLE 19 Ukraine: How to know who owns your mediaBroadcasters want check of legality of digital frequency tenderRWB: Digital TV frequency allocation deals blow to media pluralism and independenceMost digital frequencies distributed among pro-regime oligarchs
• Topics / Freedom of expression 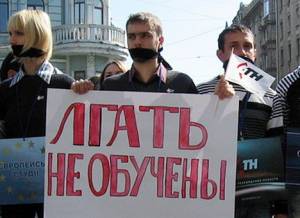 Picket by Kharkiv journalists: the banner reads: "Not trained to lie"

Stop Censorship, international and Ukrainian organizations who visited Kharkiv earlier this week are convinced that the cessation of broadcasting of three Kharkiv television channels was not merely about business relations.

On 28 September, a delegation including Ukrainian and international NGOs - Stop Censorship; Reporters without Borders; the Media Law Institute; the Kyiv Independent Media Trade Union; Internews – Ukraine, with the participation of the EU Mission in Ukraine as independent observers ended their fact-finding visit to Kharkiv.

The visit was prompted by the removal from air during August 2011 of three broadcasters: ATN, Fora and A/TVK which, the members of the delegation state in their report, “were among the few local media outlets which provided alternative and critical assessment of the Kharkiv authorities’ activities”.

Stop Censorship believes that the situation in Ukraine is of great damage to Ukraine’s image abroad and is at variance with the statements made by the leaders of Ukraine regarding commitment to European values and readiness for European integration.

The members of the delegation therefore state that the results of their visit “confirmed their concern over the general atmosphere in which Kharkiv journalists are working. We saw problems both with access to information and with the technical opportunities for circulating it.

The members of the mission did not receive comprehensive information about the actual legal and technical obstructions which are preventing renewed broadcasting by the TV channels ATN, Fora and A/TVK. These reasons were not fully explained either in the written refusals from the operators or in the public statements from the spokesperson for Ukrainian Digital Communications which has provided communications services for Fora and A/TVK since 2009.

The absence of a clear and transparent position from the operation is not only preventing the broadcasters from providing a signal to the Kharkiv Regional TV and Radio Broadcasting Centre [KhORTPC], but also their future changeover to cable broadcasting which is jeopardizing the channels’ work.

The members of the delegation are concerned over the failure to recognize ATN’s sanitary hygiene passport, issued by the Central Sanitary Hygiene Service, and the lack of any official position from KhORTPC.

We are outraged by the circumstances around the organization and holding of a meeting with Kharkiv’s Mayor Gennady Kernes at which, despite the demands from the Mayor’s Press Service for a closed meeting and assurances of the protocol nature of the video recording, the cameras were present of the television company which the Mayor and his Deputy are co-founders of.

The members of the delegation are indignant over the reports from the Mayor’s Press Service that they “did not express interest in the documents” offered by Kharkiv’s Mayor. No such documents, although promised, were provided.  We would hope that this was a misunderstanding and that the promised documents will be provided in the nearest future.

We are disturbed by the lack of accurate reports about the delegation’s visit on television which indicates that there is censorship on Kharkiv television. This in turn gives weight to suspicions regarding the real reasons for the removal from air of the independent television channels and fears that there is a real risk to pluralism and freedom of speech in Kharkiv.

Despite the fact that there is a business conflict around the TV channel Fora, the members of the delegation do not believe that the cessation of broadcasting of all three TV channels was brought about by business issues.

We would draw the attention of the National TV and Radio Broadcasting Council to the need to thoroughly investigate the situation involving the most popular Kharkiv broadcasting outlets both during non-scheduled checks, and when holding an additional tender for digital frequencies.

We call on Kharkiv journalists to support the teams from the channels which have suffered and to observe journalist and ethical standards in covering events connected with this conflict.

The members of the delegation are willing to return to Kharkiv at any time in order to check that the local authorities are keeping their word. We are also ready to meeting with members of government bodies which can help to restore freedom of speech in Kharkiv.

After a thorough check, the members of the delegation will publish a report with conclusions and recommendations regarding the events in Kharkiv’s media realm”.

As reported, on 13 September the staff of TV ATN made public an open letter to the President in which they accused the Mayor of Kharkiv, Gennady Kernes of “unprecedented pressure” and abuse of his official position. This, they said, had led to the channel being deprived of its ability to broadcast.

On 14 September the channel A/TVK stopped being broadcast, and the channel Fora which had previously had its broadcasting time reduced to 6 hours a day, was removed from air completely. Both channels broadcast ATN news.

The Director of Ukrainian Digital Communications, Maxim Tsyan, which provides the signal, asserted that A/TVK had been removed because of problems with documentation, while Fora supposedly was 36 thousand UAH in arrears, and had a problem with the contract.

ATN asserts that the Mayor is putting pressure on the Kharkiv Sanitary Hygiene Station, the Kharkiv

Regional TV and Radio Broadcasting Centre and the providers Datagrup and Velkom Telecom.

The Kharkiv Sanitary Hygiene Station has denied that any pressure has been brought to bear.

Gennady Kernes himself has asked the Parliamentary Committee on Freedom of Speech to investigate and denies any pressure on his part. He has previously claimed that ATN’s statement was the result of a political commission and calls the situation a business issue.