Crimean Tatars want an international forumMustafa Dzhemiliev: Our Principle of Non-Violence enabled us to avoid bloody conflict in the CrimeaMustafa Dzhemiliev: Pogroms against the Crimean Tatars likely in the near futureCrimean authorities present the Crimean Tatars with an ultimatumCrimean law enforcement officers target a Mejlis activistWill the Crimean authorities override the President’s word?Spiritual Directorate of the Muslims of the Crimea condemns Supreme Court ruling on Soborna MosqueLet’s build our places of worship together!Muslims win their court case for the Soborna MosqueAfghanistan War veterans in the Crimea come out in support of the Soborna MosqueLawlessness unto themselvesPolice Chief slams attempts at provocation by the Simferopol City CouncilCourt upholds Crimean Muslims over land for the Soborna MosqueCrimean Tatars warn Council of Europe of possible conflict in the CrimeaCrimean Prosecutor protests against the actions of the Simferopol City Council.For a tolerant CrimeaCrimean Muslims begin protest over obstruction in building a Mosque in SimpferopolCrimean journalist prosecuted and declared a ‘foreign agent’ for opposing Russia’s war against UkraineRussians abduct, torture and imprison young Crimean Tatar from Kherson oblast, then come for his father It's back to the USSR as Russia tries to destroy Ukrainian identity on occupied territory
• Topics / Deported peoples

The Crimean Tatars are seeking a special international forum on defending the rights of the Ukraine’s formerly deported peoples. On Wednesday at a meeting in Kyiv they addressed their proposals to foreign diplomats and representatives of international organizations.

The President of the World Congress of Crimean Tatars and Member of the Crimean parliament Refat Chubarov said that in the XXI Century the consequences of Stalin’s deportation of different ethnic groups from the Crimea have still not been eradicated.

The Ukrainian authorities, he said, have distanced themselves from the issues which face the Crimean Tatars and other peoples who returned to their home country (Greeks and Bulgarians).  He said that this was evidenced by the failure to pass a law reinstating the rights of repatriants.

He pointed out that such a law had been passed in 2004 but the then President Kuchma vetoed it.  Chubarov spoke of a paradoxical situation whereby the authorities acknowledge the unlawful nature of the Deportation and try to resolve certain social and educational problems, while refusing to pass a law which would regulate the problems.

US Ambassador John Tefft and the Head of the EU Delegation in Ukraine Jose Manuel Pintu Teisheira said that the US and EU would support such a forum.

Representatives of the Ukrainian authorities did not comment on the meeting. 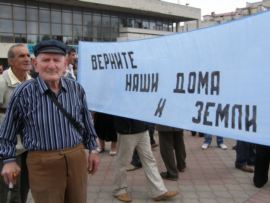