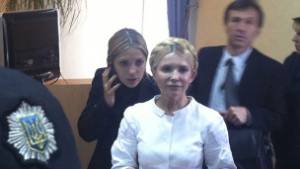 On the eve of the anticipated verdict in the trial of former Prime Minister Yulia Tymoshenko, the EU has warned that a sentence cannot fail to have consequences for Kyiv’s relations with Brussels.

Guido Westerwelle, Germany’s Foreign Minister is quoted by DPA as saying: “If it becomes clear that there is more politics in this trial than justice, we will not simply be able to go on with the agenda”. He called the trial a “test for a law-based country”.

He was speaking in Luxembourg where the meeting took place on Monday of Foreign Ministers. According to a spokesperson from the Luxembourg Foreign Ministry, Robert Steinmetz, the discussion on Ukraine did not last long, with 8 ministers wishing to express a view on the subject.  It was then agreed to add a note to the conclusions from Monday’s meeting stating that Ukraine’s European prospects will depend on the state of democracy in that country. The Ministers thus expressed their position on the eve of the anticipated verdict in the trial of the former Prime Minister.

At the same time all the Ministers supported conclusion of negotiations with Ukraine as soon as possible regarding an Association Agreement and the creation of a free trade zone.