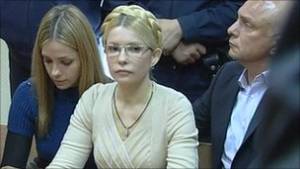 Yulia Tymoshenko's daughter and husband sat beside her in court

Judge Kireyev has ruled that Yulia Tymoshenko is guilty in a trial which has raised concern throughout the world due to the charges over a political decision made by the former Prime Minister, Yanukovych’s main presidential opponent and key opposition figure.

With the world media (and, we hope, foreign governments and international bodies) watching closely, here are just some of the reports.

Ukraine's former prime minister Yulia Tymoshenko exceeded her powers by ordering state energy firm Naftogaz to sign a gas deal with in 2009, a judge ruled on Tuesday, a verdict set to further strain ties between Ukraine and the West.

State prosecutors have asked the court to sentence Tymoshenko, main political opponent of President Viktor Yanukovich, to seven years in jail for rail-roading Naftogaz into the gas  with Russia's Gazprom in 2009.

The Yanukovich leadership says the 10-year contract with Russia has saddled the former Soviet republic with an exorbitant price for vital supplies of Russian gas.

But the European Union, one of Ukraine's main trading partners along with Russia, has told Yanukovich, who narrowly beat the charismatic Tymoshenko for the presidency in February 2010, that landmark economic agreements will be in jeopardy if she is jailed.

Judge Rodion Kireyev, in a lengthy statement to the court in which he was expected also to deliver sentence, said the opposition leader's actions while she was prime minister had led to a loss for Naftogaz of 1.5 billion hryvnias ($188 million).

"In January 2009, Tymoshenko Yu. V., exercising the duties of prime minister ... used her powers for criminal ends and, acting deliberately, carried out actions ... which led to heavy consequences, " he said.

Though Russia has rejected charges by the Yanukovich leadership that the deal was dishonestly negotiated, it is in talks with Ukraine on its terms. The Kiev government says it hopes a new contract will be tied up by the end of the year.

Tymoshenko, 50, who was flanked by her daughter and husband in court, bristled defiance from the outset of the hearing.

"You know very well that the sentence is not being pronounced by Judge Kireyev but by President Yanukovich, " she told journalists before the reading of the judgment.

"Whatever the sentence pronounced, my struggle will continue. This sentence, written by Yanukovich, will not change anything in my life or in my struggle, " she said.

About 2, 000 Tymoshenko supporters, scores of riot-police and crowds of anti-Tymoshenko demonstrators who turned out at the behest of the ruling Regions Party gathered outside the central Kiev court for the final curtain to come down on the trial.

The outcome of the Tymoshenko trial, which opened in late June and has kept political tension at a high throughout summer, could yet determine the speed of Ukraine's integration into the European mainstream.

"We are not optimistic about this trial. Our impression remains (that it amounts to) selective application of justice."

The bloc has warned Yanukovich, Tymoshenko's arch-rival, that bilateral agreements on association and a free trade zone will be in danger if she is jailed.

Tymoshenko, who has been held in police detention for contempt of court since August 5, has denied any wrong-doing in brokering the 2009 deal which ended a pricing dispute with Russia that had led to disruptions in gas supplies to parts of the EU.

When the judge late last month called an adjournment until Tuesday it was widely seen as a strategic pause to give Yanukovich and his advisers time to consider their options in the face of the Western criticism.

He has maintained her prosecution is a matter for the courts.

EU diplomats have urged Yanukovich to use his powers to "decriminalize" the charge against her -- reclassifying it as an administrative rather than an criminal offence -- to allow her to go free. But on the eve of the trial resuming there was still no sign of a move in this direction.

Her supporters say Yanukovich wants to neutralize her as a political force before next year's parliamentary election.

She and Yanukovich have been at each other's throats since 2004 when Tymoshenko used her PR savvy and rhetoric as a leader of the "Orange Revolution" to doom his first bid for presidency.

She went on to hold the post of prime minister twice under former President Viktor Yushcyhenko who gave evidence against her at her trial.

The election run-off between Yanukovich and Tymoshenko was a particularly bitter affair and she refused to recognize his victory for weeks.

She stepped down finally as prime minister, but has continued to heap scorn on his leadership and on the wealthy industrialists who support him.

By Pavel Polityuk and

(Additional reporting by  in Luxembourg; Reporting by Pavel Polityuk and Olzhas Auyezov;

A judge has ruled that former Ukrainian Prime Minister Yulia Tymoshenko criminally exceeded her powers when she signed a gas deal with Russia in 2009.

The verdict is still being read but its meaning is not fully clear. Prosecutors are seeking a seven-year jail sentence.

Mrs Tymoshenko said the charges against her were politically motivated and vowed to fight for Ukrainian democracy "till her last breath".

Riot police are outside the court as supporters and opponents gather.

There have been minor scuffles but no major clashes, the AFP news agency reports from the scene.

The US and the EU have condemned the charges against Mrs Tymoshenko and some of her allies as selective prosecution of political opponents.

European officials have suggested that if Mrs Tymoshenko were jailed - especially if that prevented her from contesting next year's parliamentary election - it would be a serious blow to the country's hopes of integration with the European Union.

Some analysts say this external pressure may influence the verdict.

However, former president and one-time ally Viktor Yushchenko and others have testified against her.

Russia pipes gas to western Europe across Ukrainian territory and relations between the two ex-Soviet states have long been dogged by disputes over transit fees and unpaid bills.

The former Orange Revolution leader is accused of exceeding her authority while negotiating the gas agreement with Russia in 2009, which critics say was to Ukraine's disadvantage.

The courtroom was barely 10 metres by six. The back half was a press pen, with close to 100 reporters and photographers, and TV cameramen standing on benches.

Judge Rodion Kireyev - just 31 years old - stood while he read his decision, taking a short break every half-hour. Behind him on the wall was a Ukrainian crest; and, on a pole reaching to the ceiling, a Ukrainian flag.

In some of the breaks Yulia Tymoshenko addressed the media, asking the public not to be afraid of the Viktor Yanukovych "regime, " comparing it to the worst of the Stalin years.

She was accompanied in court by her husband Olexandr Tymoshenko and daughter Evgenia Carr.

Everyone else in court was standing, but Yulia Tymoshenko, her husband and daughter remained seated. She and Evgenia sat close together, almost cheek-to-cheek, as one of the most controversial court cases of recent years entered its final moments.

The decision that could end her political career, and even land her in prison for up to seven years, was imminent.

"In January 2009, Tymoshenko... exercising the duties of prime minister... used her powers for criminal ends and, acting deliberately, carried out actions... which led to serious consequences, " Judge Kireyev said.

As a result of ordering state gas company Naftohaz to sign an import contract with Russia in 2009 she inflicted damages of 1.5bn hrivna ($186m) on the company, he added.

As the verdict was read out over several hours, Mrs Tymoshenko stared at her iPad, apparently not listening to the judge, occasionally exchanging whispers with her daughter, Evgenia Carr.

Mrs Tymoshenko - who has been in custody for contempt of court since 5 August - denies any wrongdoing.

Arriving at Pechersky court in the capital, Kiev, before the verdict, Mrs Tymoshenko said: "You know very well that the sentence is not being pronounced by judge [Rodion] Kireyev but by President [Viktor] Yanukovych.

"Whatever the sentence pronounced, my struggle will continue. This sentence, written by Yanukovych, will not change anything in my life or in my struggle."

Judge Kireyev retired to consider the verdict in late September after a three-month trial.

Delivering his verdict, the judge said Mrs Tymoshenko had exceeded her powers in brokering the gas deal, but did not say if this meant she was guilty or whether she would be sentenced.

He is continuing with his summing up, which correspondents say could take some hours.

During a break in the proceedings, Mrs Tymoshenko made a statement to journalists, saying human rights organisation the Helsinki Group had declared the charges politically motivated.

She said that "no-one can besmirch my honest name".

She compared the state of the country to the Soviet Union in 1937, the height of Stalinist repression.

Mrs Tymoshenko was the heroine of the Western-leaning Orange Revolution - the sudden street protests that erupted after a fraudulent presidential election in 2004 - and was made prime minister shortly afterwards.

But the next few years saw Ukraine's revolution stagnate, and were marred by bickering between Mrs Tymoshenko and her Orange allies, which paralysed the country just as it was facing a deep economic crisis.

In 2010 the revolution was definitively reversed, when Mr Yanukovych was elected president, and Mrs Tymoshenko forced into opposition.