US Judge: In the USA the Tymoshenko case would not have reached court 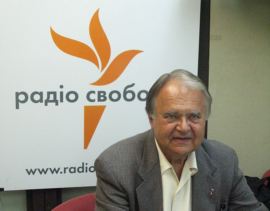 Bohdan Futey, Judge of the US Federal Claims Court considers the trial of former Prime Minister Yulia Tymoshenko to be in breach of the principles of the rule of law.  Judge Futey took part in drawing up Ukraine’s 1996 Constitution and has closely followed the development of Ukraine’s legal system. In an interview to the Radio Svoboda Ukrainian Service he also expressed concern that judicial reform in Ukraine was stalled.

The verdict issued on 11 October to the former Prime Minister, these charges mean nothing. President Kravchuk said it best: if you’re going to accuse anybody of exceeding their authority, then you need to prosecute four Presidents and 18 Prime Ministers. This is all, it would seem done in order to settle political scores with the leader of the opposition. In this trial neither the pre-trail nor the court procedures were observed. Ukraine’s Constitution guarantees an adversarial system. Did you see an adversarial system in this trial? Absolutely not. I witnessed it all. There were procedural infringements and they place in question defence of fundamental freedoms enshrined in the Constitution. You know what most amazes me? In America – if something like this happened – the American Chamber of Bar Lawyers, and lawyers would definitely express their view – how a law-based state should work according to constitutional guarantees. In Ukraine, where this is a Union of Lawyers, a Union of Bar Lawyers, a World Congress of Bar Lawyers – why do they not speak?  Where, among others, is the Legal Policy Committee of the Verkhovna Rada, or that on court issues?  Why do they not draw attention to it? All must bear responsibility for preserving the legal system and rule of law!

President Yanukovych states that he does not interfere in the work of the courts, while Ukrainian diplomats express surprise why in the West they criticize a court trial in process, after all there is an appeal procedure and they stress that this is an issue of Ukraine’s internal policy.

If diplomats talk like that, then they don’t understand what is happening. The norms of justice in the trial which has taken place were absolutely not adhered to. In America, of course, such a case would never have even got to court. What does exceeding authority mean? There was nothing that the Prime Minister herself personally in any form made use of what happened. And agreements sometimes come out well, some times not so well. If we talk of exceeding authority, then the signing of the Kharkiv Accords extending the Black Sea Fleet lease with Russia also exceeding authority and were against the Constitution.

If the former Ukrainian President signed a law prohibiting the Constitutional Court from reviewing the constitutional reform (of December 2004 – translator) which is the jurisdiction of the Constitutional Court, that is also exceeding authority. And what is happening?  Nothing’s happening to them!  Attention needs to be drawn to that. I think that all these assertions that the world is reacting badly are unwarranted. The world is showing concern for democracy. We live in a global era. A global era requires all countries which communicate with one another to adhere to certain international procedures.

There is a view that the trial of Yulia Tymoshenko gives Ukraine a chance of reforming its judicial system. How should Ukraine make use of this chance?

Reform of the judiciary is very important. In 2010 there was supposedly an attempt to reform the judicial system and approach international organizations for their expert assessment. We were working on that but then suddenly the Verkhovna Rada passed a law, not even waiting for that expert view.

A group of experts – the Rule of Law Project in Kyiv – I am working with them and there’s the Venice Commission. They approached us for help and we are trying, now after the law has been adopted to make corrections. The Law has some positive features. However there is a lot which runs counter to the Constitution. For example, “The President has the right to dissolve courts”. Then all courts must act as the President wishes. Another matter is that according to the Constitution, the highest court among courts of general jurisdiction is the Supreme Court  The Law passed says that “the High Specialized Courts will decide whether they pass cases to the Supreme Court or not”. The Law cannot deny that which the Constitution guarantees. Since when the law was passed in July 2010, we have been working on amendments. Unfortunately, however, the Verkhovna Rada has not up till now accepted for consideration any of this, as far as I know. And that staggers me! Are they really serious about this, or just talking to themselves, but not wanting to implement anything?