US Judge: In the USA the Tymoshenko case would not have reached courtEU High Representative for Foreign Affairs on the Situation in UkraineFreedom House Blasts Tymoshenko RulingCE Committee of Ministers also speaks out on the “perception of selective and politically motivated justice”Jerzy Buzek: Tymoshenko sentence "politically motivated"Canada, France and Italy also express concern over Tymoshenko verdictViktor Yanukovych v. Ukraine’s Democracy: Democracy lost, Ukraine – alsoUK warns that Tymoshenko sentence is a major obstacle to EU agreementsWhite House urges the release of Mrs. Tymoshenko and the other political leaders and former government officialsJerzy Buzek on the sentencing of former PM TymoshenkoPoland, Germany and Czech Republic all issue strong statements over conviction of Yulia TymoshenkoOSCE Chairperson expresses concern at Tymoshenko verdictMEPs deplore 7-year jail term imposed on Yulia TymoshenkoCatherine Ashton for the EU on the Conviction of Yulia TymoshenkoAI: JAILED FORMER PRIME MINISTER MUST BE RELEASEDRiot Police detain protesters against Tymoshenko verdictTYMOSHENKO SENTENCED TO 7 YEARSTymoshenko trial: the World watches…Ukraine’s Justice System unravellingGerman Foreign Minister calls Tymoshenko Trial a “Test for a Law-based Country”
• Topics / Politics and human rights
• Topics / The right to a fair trial 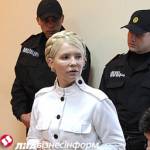 A new criminal investigation into alleged corruption has been initiated against former Prime Minister, presidential candidate and opposition leader, Yulia Tymoshenko.  This was announced by the SBU [Security Service] only two days after the guilty verdict and 7 year prison sentence meted out to Ms Tymoshenko over another charge was condemned throughout the world at the highest level.

The SBU investigators allege that Ms Tymoshenko illegally transferred more than $400m (£255m) of debt from her energy company to the State 15 years ago. Ivan Derevyanko, from the SBU, stated on Thursday that Ms Tymoshenko was at the time president and de facto owner of the company United Energy Systems of Ukraine.  The SBU are claiming that the money was transferred to her own bank card and some Swiss bank accounts, as part of a prior conspiracy with Pavlo Lazarenko, whose name the accounts were in. Lazarenko who served for a while as Prime Minister in the 1990s was imprisoned in the USA in 2006 for embezzlement and money-laundering.

In 2001 criminal investigations were initiated against Yulia Tymoshenko on charges of smuggling gas, forging documents, bribe-taking and tax evasion. All the charges concerned the time when Ms Tymoshenko headed United Energy Systems of Ukraine, a company which had the monopoly on bringing Russian gas to Ukraine.

Yulia Tymoshenko herself denies that United Energy Systems of Ukraine has any debt to the Russian Defence Ministry.

Political analyst Viktor Nebozhenko states that “this is solely for export consumption. This subject was discussed back in Kuchma’s time and never led to anything. Four different Prosecutors have looked into this issue and nothing ever came of it. The fact that the case was initiated a few days after the verdict was declared that the regime is presenting arguments to the West that Yulia Tymoshenko is not a well-known politician, but an old corrupt dealer. The Ukrainian regime doesn’t want to admit mistakes and it is already clear that the hawks among the people around Yanukovych who suggest not paying attention to international reaction have won.

Ukrainian President Viktor Yanukovych said Ukraine had been put "under a microscope" as a result of the trial.

"If this situation had come about in any other country in the world, even the most democratic, no-one would have so much as opened their mouth, " he said.  He did however say that he personally doesn’t like the course the Tymoshenko case has taken and hopes that the appeal hearing will take place on the basis of new criminal legislation.