Unlike members of the opposition Roman Landik at liberty to wander 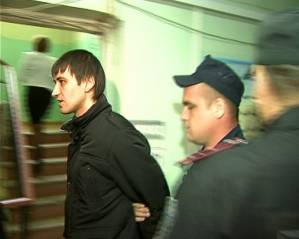 On Friday 14 October Luhansk human rights activist Konstantin Reulsky passed very close by Roman Landik on a Luhansk street.  He has had contact in the past with the former member of the Luhansk City Council, son of a Party of the Regions MP and, at least officially, remand prisoner and is 99% certain that it was Landik.

“I saw him the evening before last just after 7 walking unhurriedly to the Luhansk Regional Prosecutor’s building. He looked cheerful and well-rested”, Konstantin says.  He adds that he wouldn’t be surprised if for people like Landik, our SIZO [remand units] didn’t have a special regime, an out-prisoner system, so to speak.

Cases where the sons of deputies, prosecutor’s and others in high places escape criminal liability in Ukraine are legion.  The video footage from early July showing Roman Landik trying to chat up a girl and then beating her badly when rebuffed did however cause waves.  The public outrage prompted assurances from the authorities that Landik would be prosecuted.  He was brought back, albeit slowly, from Russia where he had fled after the scandal broke out.  On 26 September a district court in Luhansk remanded him in custody.

On 11 July several dozen NGOs addressed an appeal to the President, the Prosecutor General, National Deputies and the leadership of the Party of the Regions demanding an objective investigation of the events in the Luhansk restaurant on 4 July and punishment for the assailant.

It was not only bitter experience of previous cases which made the public wary. The assault on a 20-year-old woman went on for a considerable amount of time.  Nobody intervened, nor did the police who finally turn up actually detain him.