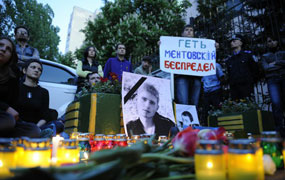 During a briefing on Wednesday the Prosecutor General, Viktor Pshonka reprimanded the Kyiv Prosecutor and his deputy over the case involving the death of student Ihor Indylo in the Shevchenkivsky District Police Station.

He was angry that the CCTV footage had been posted on the internet with fragments of the seven-hour video recording taken as material evidence in the case. He said that this material could only be assessed by a court.

He therefore issued reprimands “for the failure to take comprehensive measures of reaction to cases of violations of citizens’ constitutional rights”. He said he expected an appropriate reaction to the actions of his subordinates from the Minister of Internal Affairs, Anatoly Mohylyov.

He stated that he categorically disagreed with “the excessively lenient position of the MIA in assessing the actions of the Kyiv police and said that none of the officers of the Kyiv Central Department has even faced disciplinary penalties.

He added that the guilt of the two officers had been proven.

It is not clear what guilt he means.  One of the problems is in the charges brought against the two officers.

Police officer Serhiy Prykhodko who detained the young student is charged with exceeding his official powers, violence and degrading Indylo (this carrying a sentence of from three to eight years). The other defendant is police officer Serhiy Kovalenko who is charged with professional negligence leading to an infringement of a detainee’s rights (a fine, corrective work of up to 2 years or imprisonment for up to 3 years). Nobody has been charged with applying torture leading to the young student’s death which would carry a sentence of from 7 to 10 years.

Oleksandr Zarutsky, the lawyer who is representing Ihor’s family has submitted several applications for further examination. Oleksandr, who is not taking any money for his work, believes that the evidence clashes with the video footage (see Video footage shows Ihor Indylo’s last hours)

Information about Pshonka’s briefing from   Photo from Kyiv Post