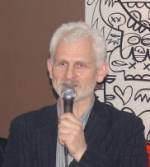 The trial of Ales Bialiatski, Head of the Viasna Human Rights Centre is to begin in Minsk on 2 November. He faces a 7 year prison sentence for alleged tax evasion.

Andrzei Poczobut, who was himself imprisoned for some months this year on charges of “slandering the President” writes in the Polish newspaper Wyborcza that Ales Bialiacki is one of the best known human rights defenders in Belarus and has long been a thorn in the side of the Belarusian authorities. The Viasna Centre which he heads has for the last 15 years been providing legal and material assistance to victims of political repression and their families. Viasna’s activities were funded by western foundations and donors. Viasna delegated Ales Bialiacki to set up bank accounts in Poland and in Lithuania in order for money to be transferred to the Centre.

He was arrested on 4 August and charged with tax evasion specifically over the money kept in foreign accounts (for use by Viasna).

It transpired that the authorities in Minsk had received information about the accounts from the Lithuanian Justice Ministry and the Polish Prosecutor General’s Office as part of international legal cooperation. When this all came to light both the Lithuanians who had also provided Belarus with information about other opposition figures and Poland suspended legal cooperation with the Lukashenko regime.