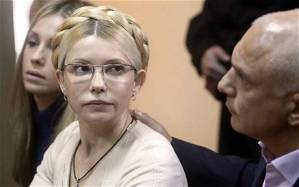 One of Yulia Tymoshenko’s lawyers, Serhiy Vlasenko (who, as reported here, was not allowed to represent her during most of the trial) says that the appeal is currently being checked and agreed. Yulia Tymoshenko has until 26 October to appeal against the conviction and seven year sentence for “exceeding her authority during the signing of the gas accords with Russia at the beginning of 2009.  The court also prohibited her from holding public office for three years and ordered her to pay over 1.5 billion dollars to Naftohaz.

“Our submission will focus on the verdict having been unlawful, illogical and not based on the material of the court case.”, Mr Vlasenko told the BBC Ukrainian Service.

“We are absolutely convinced that the case against Tymoshenko was not examined in the Pechersky District Court  but decided on Bankova, in the office of the President who totally controls the judicial system”.

Mr Vasenko says that there will be “the same judges” in the Court of Appeal and that one cannot speak of an independent court.

Criminal case against the judge who released Tymoshenko

Meanwhile the newspaper “Delo” reports that the Kyiv Prosecutor has initiated a criminal investigation against former president of the Pechersky District Court  in Kyiv, Mykola Zamkovenko. It was he who released Yulia Tymoshenko from custody in 2001 when she was accused of corruption in connection with her role in the company Single Energy Systems of Ukraine [SESU]. The newspaper writes that according to their information, Mr Zamkovenko is accusing of having “during the period from 1996 to 2001 committed official offences against the justice system, linked with the sue of official position”. The paper asserts that the investigators do not have complaints against his decision to free Yulia Tymoshenko in 2001.

As reported, following a wave of criticism from western countries over Yulia Tymoshenko’s verdict, President Yanukovych said that the verdict was not final.

There were statements of protest from most countries, and European bodies, as well as Amnesty International, Freedom House and other NGOs.

The EU cancelled Yanukovych’s visit to Brussels scheduled for 20 October where he had been supposed to discuss an Association Agreement with the EU.

Abridged from the report here

Since the statement from President Yanukovych that the verdict was not final, a new criminal investigation has been initiated against Yulia Tymoshenko, there has been intense activity from politicians, the enforcement agencies and the pro-regime media, concentrating on the new allegations involving embezzlement.