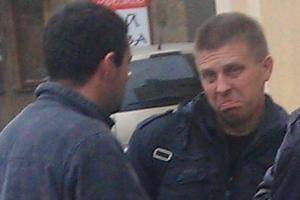 The court examination into the death of young student Ihor Indylo continued on Friday at the Desnyansky District Court with testimony from the ambulance doctor, Edward Poputnyak who first failed to hospitalize Ihor, then 8 hours later certified his death.

“He was lying with his head to the left on his right side. His face was blue”. It was due to the cyanosis (blue discoloration) that the doctor wrote in the paperwork that Ihor had choked on his own vomit.

Later the forensic expert found that the student had bruises on his arms and legs, and most importantly – fractures to the cranial vertebrae.  The doctor certified that Ihor was dead.

The forensic examination considered that the injury which killed Ihor had been sustained eight hours earlier, i.e. at exactly the time when the ambulance doctor was first called out. Edward Poputnyak says that during that first call out he did not notice anything. The ambulance team was, incidentally, called out to a heart attack.  When they arrived, the head of the team says, they saw Ihor with his eyes closed on the floor of the room where they photograph detainees. “We were told that he had lost consciousness”.  The doctor raised his eyelids, and Ihor reacted to the light. On that basis Poputnyak concluded that Ihor was pretending. “He was given ammonium salts and he began making a face”, the head of the team wrote in his conclusion that all was well.  He says that he pushed on Ihor’s nerve ends under his ear, and Ihor supposedly swore and tried to break free from the doctors.

“I asked if he had been drinking and he said “Not your bloody business”.  The student’s alleged bad behaviour was mentioned by the head of the police station (who was not in the station at the time) and the inspector who was there later when Ihor died. All their accounts paint a picture of a drunkard who couldn’t stay on his feet, who fell, hit his head and died.

Or would, were it not for some other questions.

For example, how other people respond when their nerve endings are squeezed. Dr Poputnyak immediately agreed that if he was squeezed under the ear, he might also wave his arms about and could shout. When he was asked whether alcohol could mask a closed head and skull injury, he said it could. When the main question was put – why he had not hospitalized the young man who was in a state of intoxication, was losing consciousness, falling and could therefore receive life-threatening injuries, the doctor said that it didn’t seem like that to him. “That’s my inner conviction”. When assailed by all lawyers, the lawyer representing the Indylo family and the defendants’ lawyers, he admitted that “I didn’t even have a chance to examine him”  He also said that the police were exaggerating when they claimed that they had pleaded for 20 minutes for Ihor to be taken to hospital. He asserts that the duty officer said when they were on the stairs that it would be good to take him to the hospital.  The doctor supposedly answered “that’s not our client”.

Oleksandr Khomenko, the young man who went with Ihor from the hostel to the police station that night is supposed to give evidence on Monday. Since Ihor’s death in custody, he has avoided both Ihor’s family and journalists. Last Monday, despite the court summons, he failed to appear.

From the report by Yehor Sobolyev at Svidomo  The photo above is of Edward Poputnyak and Serhiy Prykhodko, the officer accused of "negligence" over Ihor’s death outside the court