Ukraine’s Mines remain deadlyMiner who complained of inhuman conditions after mine disaster “transferred”Ukraine’s Miners: Put at Risk and ExploitedAnother methane explosion at a Luhansk region mineNo End to the Deaths in Ukraine’s Mining DisastersUnion blames Mine Owners for Fatal BlastRefined torment of minersReformers of the Mining Industry – Miners’ Opinion not needed?On illegal mines in the Donbass region and where the Police and other authorities are not lookingWere miners left to die after the explosion at the “Zakhidna” Mine?Black Gold mixed with BloodDonbas Miners: Neither decent working conditions, nor a normal burialMore victims of Donbas’ illegal minesOrganizer of illegal mine imprisonedPit No. 8: Illegal Mines in UkraineMain hero of illegal mining film savagely beatenMore victims of police protection of illegal mining‘My mom wanted to take poison, but she learned from a letter that we were alive.’ The story of a doctor from Mariupol, part 2Ukraine’s penitentiary institutions and the warVovchansk Engineering Works: Dungeons on the Chechen Model
• Topics / Social and economic rights 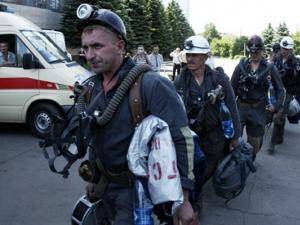 On 31 October two miners died of gas poisoning in the former mine Stozhovska-2 in the Donetsk region.  The two men were working for the company Buran Ltd which is carrying out restoration work in the mine.

The Ministry for Emergencies reported that their bodies had been brought to the surface at about 23.00.  A check is supposed to be being carried out.

Ukraine’s mines are lethal, and not necessarily because the safety regulations are not intact, and not always because of the conditions.  Many deaths occur because the men who work underground get paid only for backbreaking work and are forced to agree to bad conditions or themselves cut corners in order to ensure output enabling them to provide for their families.

According to statistics cited by Radio Svoboda, each year Ukraine extracts 70 millions tonnes of coal. Each million costs the lives of two miners.

37 miners died at the end of July in two mines – the Sukhodilska-Eastern Mine in the Luhansk region owned by billionaire and Party of the Regions MP, Rinat Akhmetov and at the Bazhanov Miner in the Donetsk region.  28 children and young people lost their fathers.

One of the miners from the Sukhodilska-Eastern Mine, Ihor Smetanin stated at the time that the accident was linked with the management disregarding the bad state of the safety conditions and demands on the men to produce more and more.

Every year men die in Ukrainian mines and each time government officials promise “fundamental and firm” moves on assessing the situation and determining responsibility for people’s safety.

Information about the 31 October tragedy and photo from here