New witnesses questioned in the prosecution of former Minister of Internal Affairs, Yury Lutsenko say that the Prosecutor General have continued questioning them after the pre-trial investigation had been completed. Yury Lutsenko has called this pressure on the court. At the same time, his wife Iryna says that her husband’s health is deteriorating due to chronic illnesses not receiving medical attention, and his children are suffering without their father.

Yury Lutsenko was detained by Security Service Special Force officers in late December last year while walking his dog. He has been held in custody ever since. His detention, the charges against him and the failure to provide him with medical treatment have been widely criticized both within Ukraine and abroad.

On Monday, Serhiy Ostapenko, former head of the support department for the work of the Minister of Internal Affairs said in court that he had been summoned for questioning to the Prosecutor General’s Office after the criminal investigation was over. Yury Lutsenko responded by accusing the Prosecutor of pressure on the court and said that the Deputy Prosecutor General, Renat Kuzmin should be questioned.

Viktor Klimenko, representing the prosecution, asserted after the hearing that the Prosecutor has the right to such interrogations, especially since Ostapenko could have been called to the investigator not over the Lutsenko case.

“The law envisages the right of the Prosecutor to summon a witness for questioning in a criminal prosecution. At the trial we did not hear proof that the witness was specifically summoned over this case”.

Ihor Fomin, lawyer for the ex-Minister, considers such questioning to be unlawful. “This is some sort of particular norm of theirs – to continue the pre-trial investigation while the court trial is underway. I consider this to be altogether pressure on witnesses”.

Yury Lutsenko looked ill at the hearing. His wife told Radio Svoboda that Yury Lutsenko’s health is deteriorating due to the cirrhosis of the liver and hepatitis which have developed while he has been held in detention and which are not receiving proper treatment. She says that she went to see the judge, but could not find out whether a permit had arrived from the SIZO [detention centre] to continue Lutsenko’s treatment. Last week Yury Lutsenko said that he had not been receiving even the medication that he had had for the last month, and that he was living off painkillers.

Iryna Lutsenko also spoke of the difficulties for her family with Yury Lutsenko in detention. She said that their younger son is suffering the most. The children at his school had first gloated that Lutsenko was in detention, however, she says, this changed after he went on hunger strike earlier this year “as the public understood that this is not farce.”

Last Thursday after Yury Lutsenko  was again taken ill in court. Judge Serhiy Vovk still refused to allow him to be examined in hospital and placed responsibility on the State Penitentiary Service. 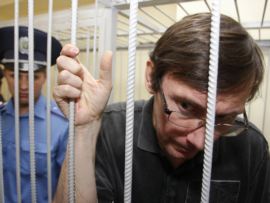