Any Politician justifying Stalin’s Crime against the Crimean Tatar People is unacceptableNot Ministerial MaterialA Letter to President Yanukovych in support of the Crimean TatarsStability in Crimea: Problems and ProspectsCrimean Tatar Remembrance Day ignored by the authoritiesIn Support of the Rights of the Crimean Tatar PeopleOne step closer to law reinstating the rights of deported peoplesAll-out attack on press freedom in the CrimeaLargest independent Crimean channel silencedRussia’s aggression poses dangers beyond Ukraine’s bordersCrimea: Anti-Semitic card and other provocation in time of siegeAssembly of Nationalities and other Election ManoeuvresThe Crimean Tatar Issue: A Government in Dangerous DenialToo Many Questions in Zaporizhya Church Bomb CaseŠtefan Füle: Rights of Crimean TatarsOngoing Smear Tactics against Crimean TatarsA Syllabus DividedCrimean schoolchildren get Regions Party propaganda in school diariesRemembrance and VigilWe will not forget
• Topics / Politics and human rights
• Topics / Interethnic relations
• Topics / Deported peoples

Volatile Appointment for the Crimea

If, back in March 2010 responsibility for some quite scandalous ministerial appointments could be shared with the Prime Minister, in November 2011 President Yanukovych stands alone. And the burden of responsibility for appointing Anatoly Mohylyov Prime Minister of the Crimea is serious. Response from representatives of the Crimean Tatar people was understandably swift and angry given Mohylyov’s track record as head of police in the Crimea and author of at least one anti-Crimean Tatar article.

The Internet publication Glavred may be right in saying that the appointment of another Donetsk region man to replace Vasyl Dzharty who died in August this year came as no great surprise.  Anatoly Mohylyov’s past “achievements” certainly did not prevent him being appointed head of the President’s election headquarters in the Crimea and then Minister of Internal Affairs in March last year.  There now seems little oncern that under his leadership, there has been a sharp increase in deaths in police custody, cases of violent dispersal of peaceful demonstrations and use of the traffic police to stop demonstrators and others reaching Kyiv.

Since none of this can be unknown to those in the President’s Administration, the question must be asked whether this appointment is about more than just jobs for the boys.  During an extended Cabinet of Ministers meeting on 2 November, President Yanukovych came up with the extraordinary – and entirely unsubstantiated – allegation that opponents of the authorities were amassing weapons for attacks on bodies of power.  Then on Sunday the servile State UTV-1 reported that “Ukrainians are buying up weapons en masse”.  All of this, and the suspicious ease with which protesters “knocked down” fencing around the Verkhovna Rada before being pushed back by riot police on 3 November, does arouse unpleasant suspicions.  Such measures are typically used to prepare the public for more repressive measures against those expressing their democratic right to peaceful protest.  In this light, Mohylyov’s new appointment seems particularly dangerous.

Despite the President’s fine-sounding words after coming to office, virtually no attempts have been made to resolve acute problems facing the Crimean Tatar people, especially over land.  In this Yanukovych differs little from his predecessors, who have also reacted inadequately when Crimean Tatars in response resort to squatting and other methods. Such measures included the special police operation on 6 November 2007 in which police, a Berkut riot unit and internal forces officers removed a much smaller number of Crimean Tatars and demolished unfinished buildings on the Ai-Petri plateau.  7 Crimean Tatars were hospitalized, one with a gun wound, 28 were detained, with 18 of them receiving terms of administrative imprisonment of between 3 and 13 days.

This was how Anatoly Mohylyov as Head of the Crimean police addressed the fraught issues of land and inter-ethnic relations in the Crimea.  He used a different medium in 2008 with an article published in Krymskaya Pravda, a publication known for virulently anti-Crimean Tatar material.  The article, “A conflict along the lines of Kosovo is brewing in the Crimea”not only repeats Stalin’s lies about collaboration of the entire Crimean Tatar nation with the Nazis as excuse for their Deportation in 1944, but also shares the following vision with Mohylyov’s readers: “a conflict is brewing in the Crimea, you’d have to be blind not to see it.  And it’s being artificially provoked by specific forces and using specific funds … Our Slavonic brotherhood is like a thorn in the side of Western civilization … So that the conflict in the Crimea does not subside, it is periodically stimulated, both ideologically and financially. Here the roles are clearly delineated: the “aggrieved” side, the Crimean Tatars headed by the Mejlis; the “oppressors” – State authorities and the “occupiers”, that is, the rest of the population of the peninsula.”

Mr Mohylyov, like any other person, has a right to his views.  However his previous posts and latest appointment, as well as the duty of the President as Guarantor of the constitutional rights of all Ukrainian citizens make it quite impossible to dismiss such utterances as harmless nonsense.

Nor are the concerns only linked with the Minister’s previous roles. The Ministry of Internal Affairs under Anatoly Mohylyov has become even more closed to the public and resistant to any efforts to counter lawlessness by police officers.  One particularly flagrant example of such behaviour was the death in police custody of young student Ihor Indylo in May 2010 just hours after being taken to the station.  Public outrage prevented the matter from being muffled, however the police officers are charged only with “negligence” and the police are still emphatically denying any wrong-doing, despite CCTV footage giving the lie to their story.  Similar denials in the face of video recordings, eye witness testimony, etc, have become absolutely standard including in cases where police have been used to crush peaceful protest, as in Kharkiv’s Gorky Park in May-June 2010 and on Independence Day in Kyiv this yea

In August 2008 the war between Russia and Georgia led to heightened concern that the Crimea could easily turn into a hot spot of conflict  There was a great deal of talk, but, as always, no adequate response to the issues which create tension in the region.  The replacement of Vasyl Dzharty by Anatoly Mohylyov can only exacerbate tension and conflict in the region. The only real question is whether this is deliberate, since what such dangerous play could lead to is all too obvious. 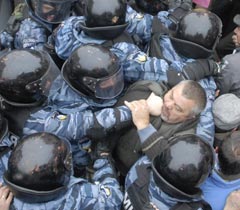