23 November – Ukrainian Journalists take a stand against ImpunityCourt issues arrest warrant for Mykola MelnychenkoGongadze Lawyer: Pukach repeats learned phrases about uprisings and spiesOSCE media freedom representative urges full transparency in Gongadze murder trialNo apparent hurry to try Gongadze murder suspectCourt decisions in Pukach case also hidden from the publicMyroslava Gongadze: “The Public should understand what criminals governed the country”CPJ: Gongadze suspect admits to killing, implicates KuchmaGongadze Lawyer: Pukach acts as though he feels protectedGongadze murder: Material on Kravchenko returned to the Prosecutor GeneralMyroslava Gongadze: They’ve taken away my right to know the motives of Pukach’s crimeCPJ: Gongadze murder suspect’s trial should be open to publicGongadze Case: 150-page indictment behind closed doorsGongadze Lawyer: Where are the “State secrets” in the Pukach trial?Gongadze Lawyer: Pukach Case closed so that Journalists don’t hear to muchOne of the aggrieved parties in the Pukach trial kept out of the hearingCourt hearing in Pukach trial postponedPukach trial to be held behind closed doorsKuchma’s lawyers get criminal investigation reopened against MelnychenkoTrial of Gongadze murder suspect to continue behind closed doors
• Topics / The right to life
• Topics / Freedom of expression

Impunity is a silent killer 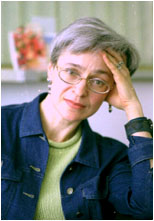 ARTICLE 19 marked the first ever international day against impunity by holding a silent vigil outside the Ukrainian, Belarusian and Russian embassies in London to highlight the unsolved cases of murdered journalists in those countries.  ARTICLE 19 calls on the authorities of Ukraine, Belarus and Russia to adopt all necessary political and legal measures to protect journalists and defend the right to freedom of expression, in accordance with their international obligations.

None of the masterminds behind the 22 murders or disappearances of journalists featured in the ARTICLE  19 and International Media Support joint report: No Justice for Journalists in Ukraine, Belarus and Russia have been brought to justice, allowing for impunity to further flourish.  The report documents the inadequate response of the Russian, Belarusian and Ukrainian governments to disappearances and killings of journalists over the course of the last decade. The high profile nature of these cases combined with the apparent lack of political will to solve these crimes has contributed to a pervasive climate of fear and impunity in these countries.

The impunity surrounding killings and disappearances of journalists places the governments of Belarus, Russia and Ukraine in breach of their obligations under international and European human rights law, particularly the positive obligations in relation to the rights to freedom of opinion and expression, the right to life and the right not to be subject to torture, cruel, inhuman or degrading treatment. The International Covenant on Civil and Political Rights has been ratified by all three states and the European Convention on Human Rights has been ratified by Russia and Ukraine.

“The impact of  impunity is far reaching, resulting in a chilling effect on freedom of expression in Ukraine, Belarus and Russia.  These states turn a blind eye to the murder and disappearance of journalists, allowing both the masterminds and perpetrators of such crimes to remain at large. Ultimately impunity kills independent investigative journalism, ” said Agnes Callamard, Executive Director, ARTICLE 19.

“The lack of successful investigations into the killings of journalists in Ukraine, Belarus and Russia lays the foundation for self-censorship as a method of protection , thereby curtailing journalists from  criticising the government through investigate stories tackling issues  such as corruption and  human rights violations, ” continued Callamard.

The flurry of activity, specifically by both the Ukrainian and Russian administrations at opportune moments, and in particular around anniversaries of the murders, shows there is certainly an understanding within their government apparatuses that there has to be a public reaction from their side. However, these reactions are often just ‘window-dressing, ’ as closer to the date of anniversary or another politically opportune moment there is a sudden development in the criminal investigation, specifically in high-profile cases, which then remains without a tangible result. Statements published about the developments in the cases seem to have become largely a public relations exercise to keep national and international critics satisfied.

Even re-opening of investigations does not necessarily lead to results, and without the necessary transparency and  involvement of family members and colleagues, there is a fear that this is merely an empty gesture. The general lack of disclosure of information, even to relatives, adds to this concern.

Despite certain recent developments, such as for example in the cases of Georgiy Gongadze in Ukraine and Natalya Estemirova in Russia, there is little confidence that this could reverse the overall impunity for attacks and killings of journalists.  Georgiy, the co-founder/editor-in-chief of an opposition website, disappeared on 16 September 2000, and his body was found in November 2000, decapitated.  More than ten years since his death a former general of the Ministry of Interior, Aleksei Pukach, alleged to have strangled and beheaded Gongadze, is now being tried behind closed doors, against the wishes of Georgiy’s widow, Myroslava Gongadze. On 24 March 2011 an investigation was launched into the involvement of former President of Ukraine, Leonid Kuchma for ordering the murder.

In the case of Natalia Estemirova, who was killed on 15 July 2009, investigating authorities recently reportedly announced they are now looking into the possibility that local ministry of interior officials were involved in her murder – human rights organisations previously maintained that case file material was made up, significant leads were not followed and that the criminal investigation did not use crucial evidence, such as a comparative DNA analysis.