Ambulance doctor, Valery Kulyk, asserted in court on Friday at a hearing of the Leninsky District Court in Luhansk that after the “fight” with Maria Korshunova, Roman Landik, son of a Party of the Regions MP and himself at the time a deputy of the Luhansk City Council had suffered from concussion.

Kulyk said that the call out had been from the Leninsky District Police Station on 4 July and that he had examined both Korshunova and Landik.

He said that he had first examined Korshunova.  He says that he wrote that she had a blow to soft tissue. She said that she had fainted and he therefore did not exclude the possibility of concussion and suggested she go to hospital which she refused.

He did not, however, find a nose fracture and says that he learned of this from the media.

He then says that he examined Landid and found him to have an injury to the head, erratic pulse and concussion. He says that after the examination Landik was taken to the hospital to get stitches to his wound.

Kulik also asserted to the court that he could smell alcohol from Korshunova, but not from Landik. There were no visible inuries to the young woman’s face, he claimed.

The testimony coincided with that which he gave the police.

The video footage of Roman Landik beating up a young woman who refused his advances in a Luhansk restaurant has been watched on the Internet by a huge number of people.  It caused outrage, and promises that the MPs son would be prosecuted.

He was brought back, albeit slowly, from Russia where he had fled after the scandal broke out.  On 26 September a district court in Luhansk remanded him in custody. 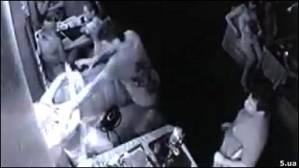