Chornobyl Clean-up Workers: We’ll hold out to the end 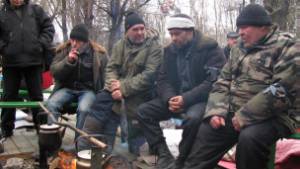 Members of the protest on Monday wore black ribbons in memory of Gennady Konoplyov, who died when police stormed and dismantled the protesters’ tents on Sunday evening

Since the dismantling of the tents erected by the Chornobyl Clean-up workers protesting against cuts in their pensions and death of one of the protesters, the men on hunger strike are continuing their protest in the open air. Two fires have been lit on the square in front of the regional department of the Pension Fund.  The men sit around them, smoking and drinking tea from thermoses. There are boards around, mattresses and blankets in the place where until Sunday evening the tents were standing.

The mattress on which the dead man, Gennady Konoplyov, slept has not been cleared, and two candles burn on it in memory, lying with some red carnations, tied with a black ribbon.

An icon has been pinned to the tree where on Sunday evening they lay the 70-year old former miner  who had specially come to Donetsk to take part in the hunger strike.

Yury Rybak, one of the protesters recounts: “On Sunday evening at 19.05 four men in plain clothes and two police officers swamped on the tent. They smashed pipes and poured water on the gas stoves, there was steam and fumes. They ripped out the rope and the tent caved in, people were lying under the material. I held the right corner because Mykola Goncharov was lying under there and he couldn’t get up. It ended with Gennady Konoplyov being dragged out of there, put under the tree. They began giving him mouth to mouth resuscitation. We dragged him to the ambulance and then the doctor showed us the cardiogram – a straight line”.

Pavlo Lomizov who is also on hunger strike says that he was sleeping in the small tent when they heard the noise. The police had surrounded the big tent and wouldn’t let them near, while the traffic police on both sides were preventing cars from stopping to see what was happening.  He says they trampled down people as if they were dirt.  The operation, he says, was coordinated and organized, with the tent dismantled within 5 minutes.

As reported, Gennady Konoplyov was not one of the Chornobyl clean-up workers. He had come to Donetsk to take part in the hunger strike to show solidarity with the protesters. Volodymyr Morodumov from Dmytrov says that he knew him very well, that they had stood together in Kyiv in 1989 during the miners’ strike.  “He was an activist, never stood on the sideline”.  He had seen on TV a report about the protest and immediately set out to support them. He says that Gennady Konoplov was a person to be respected, and will always remember him. “His death has somehow drawn us closer”.

Gennady Konoplyov was supporting his two underage grandchildren after his daughter-in-law died a year ago in a car accident.

The BBC Ukrainian Service explains that the authorities have another view of the conflict and quote the head of the Regional Administration, Andriy Shyshatsky who claims that “everything that happened was reformatted into a political project to destabilize the situation in the region.” He claims that some of the hunger strikers were ready to stop their protest but that a number of activists “blocked that decision”.

He also says that they have a video which they can demonstrate confirming that there was no resistance, except shouts, and that there were only about 15 protesters. Another representative of the Administration asserted that Mr Konoplyov’s death was from natural causes, that he had needed an ambulance the day before but refused hospital treatment and that he died of a heart attack.

The protesters spent the night in the open air or in other tents without heating.

The protest has been continuing since 14 November (others have reported 15 November – translator).  The men who took part in the Chornobyl clean-up after the nuclear accident in 1986 are entitled by a special law to benefits and a special pension due to the very grave damage to their health caused by that work. The protesters, among very many throughout the country, are demanding payment of their pensions in accordance with the law.  In November they received amounts 3.5 times less than they were entitled to.  (We are not talking here of major amounts of money, even full payment of money due in no way allows for a luxury lifestyle, and most of the people have serious health issues  – translator).

Another of the men on hunger strike, Viktor Isayenko is adamant that they will continue their protest, sleeping in the open.  If they drive them away, they will tie themselves to trees and stay there until the authorities resolve the problems. Let them give us what we earned, he says, and then there won’t be anybody protesting. Last year he had two operations, an eye operation and to remove a kidney, which cost 20 thousand UAH.  There are constant medical problems and nobody gives them anything for free. What sort of mood do they expect the men to be in?

“Our families cry, but support us”, Petro Balakliyets from the Slovyansk district says. “The hunger strike is not stopping and will continue to the end. We will leave only in two cases – either they take us out feet first, or the government complies with the laws, restores our constitutional rights and doesn’t touch them any more.”

From information at the   (Photo also from there)