Civic society will identify the most – and least – transparent authorities 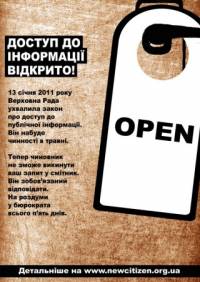 The authorities still do not provide substantive answers to information requests and restrict access to State registers of court rulings and property rights.  At a press conference on Monday, Viktor Taran from the Political Studies and Analysis Centre stated that despite the Law on Access to Public Information being among the world’s 10 most effective and open such information acts, the Ukrainian authorities have not become more transparent since it came into effect on 9 May this year.

The Centre in cooperation with the New Citizen partnership has carried out monitoring over the last four months. On the basis of this, they will be drawing up ratings of the authorities.  District and regional administrations have been sent similar information requestions, asking for details about the holding of tenders, system of social protection, repair of roads etc.  The authorities’ level of compliance with the Public Information Act will be assessed on the basis of these results using a scale of 1 to 5.

Mr Taran says that they plan at the end of the year to make awards to the most and least transparent authorities.

Roman Holovenko from the Institute for Mass Information says that officials can’t be bothered reading the Public Information Act and try to make things “official information” which have no right to be considered such. He adds that the greatest number of complaints at present are over the failure to publish with 20 days all draft decisions from the authorities.

Ihor Rozkladai from the Media Law Institute says that there are problems with full implementation of the Act since the government is procrastinating over passing subordinate legislation needed.

General concern was expressed over the closure and restriction on access to State registers on court rulings and property rights.

Officials are most reluctant to provide information about the use of public funding.  Victoria Syumar, Executive Director of the Institute for Mass Information points out that this is an acute problem particularly in the context of Euro 2012. She says that the courts predominantly rule in favour of claimants where issues of access to information are concerned, except where the elite is concerned.