Around a thousand people took part in a symbolic funeral procession on 29 November through the centre of Donetsk.  They were remembering participant in the protest and hunger strike by former Chornobyl clean-up workers, Gennady Konoplyov, himself a retired miner who had come to take part in the hunger strike in solidarity with the protesters.  Mr Konoplyov died, apparently from heart failure, on Sunday evening during the forced dismantling by police and men from the Ministry of Emergencies.  The procession accompanied men carrying an empty coffin from the Pension Fund building to the Donetsk City Council. There were a number of different flags from the various groups present and also banners reading, for example, “Lviv with the Donetsk people”, “Odessa with the Donetsk people”.

At around 1 p.m. the members of the procession lowered the coffin and wreaths onto the pavement outside the Ciyt Council  with a photo and the day of birth and death of Gennady Konoplyov.

Gennady Konoplyov was buried in his home town, Rodynske in the Donetsk region. 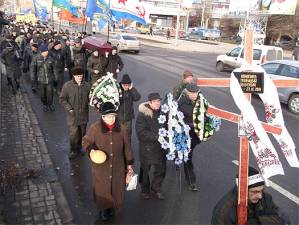