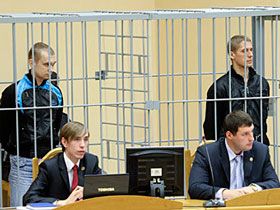 The Viasna Human Rights Centre reports that the Belarusian Supreme Court has convicted two young men - Dzmitry Kanavalau and Uladzislau Kavaliou - of the bomb attack in Minsk on 11 April 201 and sentenced them to death.

The death penalty was demanded by the Deputy Prosecutor General, Alexei Stuk.

Human rights defenders, in particular Viasna have over the last two weeks been asking Belarusians and people throughout the world to come out against the death sentence for these two young men.

There are a number of compelling arguments against the death penalty anyway.

In this case, the trial has taken place of two young men for a terrorist attack which raised doubts about who was behind it from the outset.

It has taken place in a country with no independent judiciary, Prosecutor or law enforcement bodies.

Many of the victims of the attack have joined others in expressing doubts about the evidence of the two young men’s involvement.

The petition here http://thepetitionsite.com/1/15-days-left-to-save-lives-of-2-young-men-that-are-going-to-be-executed/  is now out-of-date.  We will provide information of who to approach as soon as possible.