EU concerned over obstruction of peaceful protest in Ukraine 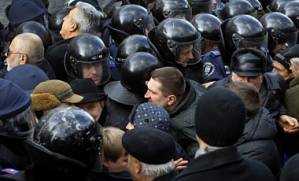 UNIAN reports that the EU Commissioner of European Neighbourhood Policy, Štefan Füle has expressed concern over reports that people demonstrations have been obstructed with indications that excessive force was used by police.  They cite a press release (not yet present on the Commissioner’s site – translator) which stress the need for the authorities to safeguard conditions for freedom of assembly and expression.

The press office mentions what they call the unclear situation over the death of Gennady Konoplyov who was on hunger strike in solidarity with the Chernobyl clean-up workers in Donetsk on Sunday evening when police and Emergency Ministry officers stormed and dismantled the tents they were holding their protest hunger strike in.

The statement notes that the President has instructed the Prosecutor General to investigate the death and calls on the competent authorities to study the case and establish the circumstances of his death in timely fashion.