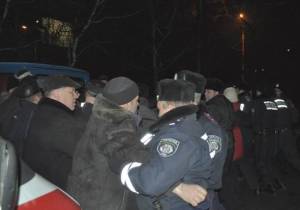 The Working Group delegated by the MIA Public Council says that there were violations of legislation by both the Donetsk law enforcement bodies and the judges who banned a peaceful protest action by the Donetsk former Chernobyl clean-up workers.

Member of the Working Group, Volodymyr Chemerys states that the Donetsk police did not have sufficient evidence that former miner and one of those taking part in the hunger strike in Donetsk, Gennady Konoplyov, did not die as the result of the raid by Special Force officers on the tent camp.  As reported, Mr Konoplyov died minutes after men from the police and others in plain clothes stormed the main tent erected outside the Donetsk Regional Pension Fund, used water to extinguish the gas burners and amid smoke and fumes pulled down the tent so that it fell on the former Chernobyl clean-up workers inside, many of whom have disabilities and ill health directly related to their work at Chernobyl.

The Working Group considers that the Donetsk Police Department did not have sufficient grounds for approaching the Mayor of Donetsk asking that he apply for a court ban of the protest by the former Chernobyl clean-up workers. The protest was peaceful.  Neither the police, nor the Emergencies Ministry had the authority to enforce the court ruling, Chemeris says.

The Working Group was carrying out its own investigation into the events on 27 November and death of Gennady Konoplyov.