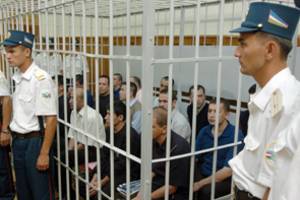 When researcher researcher Steve Swerdlow was on the ground in Uzbekistan in late 2010, Human Rights Watch got a rare glimpse into this isolated, repressive regime. Courageous lawyers, torture victims and their relatives took great risks to tell their stories in a series of audio interviews. Soon after, Human Rights Watch was effectively expelled from the country.

The West has to wake up to the fact that Uzbekistan is a pariah state with one of the worst human rights records. Being located next to Afghanistan should not give Uzbekistan a pass on its horrendous record of torture and repression.

(Berlin) – Uzbekistan has not kept its promises to stop torture in its criminal justice system, including electric shocks and asphyxiation, Human Rights Watch said in a report released today. Safeguards to halt the practice that were announced with fanfare have not been put into effect. Western governments seeking closer ties with the authoritarian Central Asian government for strategic reasons have all but ignored the abuses.

The 104-page report “‘, ” provides rare first-hand evidence of wide-scale human rights abuses in the isolated country, from which United Nations human rights experts have been banned for almost a decade. In Uzbekistan, human rights activists are languishing in prison and independent civil society is ruthlessly suppressed.

“The West has to wake up to the fact that Uzbekistan is a pariah state with one of the worst human rights records, ” said Steve Swerdlow, Uzbekistan researcher at Human Rights Watch. “Being located next to Afghanistan should not give Uzbekistan a pass on its horrendous record of torture and repression.”

The report is based on more than 100 interviews conducted in Uzbekistan between 2009 and 2011.

Torture is a chronic problem in Uzbekistan, as highlighted by the international outrage  in 2002 over the case of a man imprisoned for religious “extremism” who experts concluded died as a result of  in a notorious prison and findings by United Nations bodies that torture is both “widespread” and “systematic.”

But torture in Uzbekistan is not a thing of the past. Human Rights Watch documented cases in which authorities poured boiling water on an activist during an interrogation, beat detainees with rubber truncheons and water-filled bottles, hung detainees by their wrists and ankles, subjected them to rape and sexual humiliation, and asphyxiated them with plastic bags and gas masks.

Despite this record of abuse and repression, the United States, the European Union, and individual leading European governments have in recent years dramatically weakened their stance on human rights toward Tashkent, due to Uzbekistan’s strategic importance to neighboring Afghanistan as a land route for NATO troops and supplies.

The  on Uzbekistan in 2009, while the US moved in September 2011 to waive Congressional human rights restrictions on assistance, including on military aid, to the Uzbek government. Germany, which is leasing a military base in Termez in southern Uzbekistan, has rejected taking a public stand on human rights abuses in Uzbekistan. In November, the United Kingdom also held negotiations with the Uzbek government about the possibility of using Uzbek territory to move troop supplies out of Afghanistan.

The United States, European Union, and other key international actors should support the creation of a special UN mechanism on the human rights situation in Uzbekistan and consider imposing targeted punitive measures, such as asset freezes and visa bans, on Uzbek government officials responsible for torture and other grave human rights violations, Human Rights Watch said.

In one torture case described in the report, the wife of “Abdumannob A., ” whose name has been changed to protect him, spoke of the beatings her husband endured in a Tashkent pretrial facility at the end of 2008 and much of 2009, when he was held by security services and accused of espionage. She told Human Rights Watch:
Officers would hang him from the ceiling by his wrists, and eight or nine people one after the other would beat him. When I saw him, it was obvious he had been hanged by the wrists. I could see the marks. He told me that several times guards and detainees were brought into the interrogations and were given needles to poke under his nails. Guards handcuffed him to his cell once and burned his penis with newspapers that they had lit on fire, giving him a second-degree burn.
Human Rights Watch also met with the mother of an 18-year-old boy who was detained as a “witness” in 2010 for allegedly participating in a street fight. She described how, according to her son, police had used a gas mask on him to simulate asphyxiation, and forced him to sign a confession stating that another boy was also present at the fight.
Amid much fanfare, the Uzbek government in 2008 adopted habeas corpus – the judicial review of detention – and later other legal reforms, in apparent moves to combat such cases of torture. European governments and the EU cited these moves as signs of “progress” when they decided to drop sanctions.

In reality, Uzbekistan’s record on torture and other serious rights abuses has not improved since the adoption of habeas corpus and in several respects has worsened, Human Rights Watch said.
“Talking about reforms while the police and prison officials go right on torturing people is no improvement, ” Swerdlow said. “This problem won’t stop until Uzbekistan’s leaders, starting with President Islam Karimov, publicly acknowledge the scale of this problem and urgently begin fulfilling Uzbekistan’s international commitments.”

Habeas corpus has done little to protect detainees from arbitrary detention, torture, or ill-treatment. Lawyers told Human Rights Watch that Uzbek courts approve prosecutors’ applications for detention in almost all cases, without conducting an independent review of the merits of the request. The lawyers said that the courts often adopt government-proposed sentences verbatim in decisions authorizing arrest.
Under Uzbek law, police and investigators can hold suspects up to 72 hours before bringing them before a judge for a habeas corpus hearing, a period incompatible with human rights norms. Habeas corpus hearings themselves are closed to the public, undermining a key safeguard designed to promote fairness in hearings.

Human Rights Watch found that police and security agents use torture to coerce detainees to implicate themselves or others, viewing it as an effective instrument for securing convictions and meeting internal quotas.
Since the May 2005  of hundreds of people, most of them unarmed, in the eastern city of Andijan, Uzbek authorities have made it increasingly difficult to investigate torture. The authorities have imprisoned and harassed activists who attempt to document torture and have to let international monitors or international human rights groups work in the country.

Under its campaign to fully control the country’s legal profession, the government has abolished independent bar associations and required  lawyers to retake the bar examination every three years, with often-bizarre results. Highly experienced lawyers who have been required to retake exams have “failed, ” while their junior colleagues “passed” with strong scores.
The new law restructuring the legal profession violates the Uzbek Constitution and international standards on the independence of lawyers and has had a chilling effect on lawyers’ work, Human Rights Watch said. Several lawyers who consistently take on politically sensitive cases or raise allegations of torture have been disbarred.
Human Rights Watch called on the Uzbek government to end torture. The government should ensure that habeas corpus is implemented in line with international standards, that procedural rights such as access to counsel are protected, and that the independence of the legal profession is upheld.
“It is absurd to speak of progress on the rule of law in Uzbekistan when some of the country’s fiercest and most independent lawyers are being silenced, ” Swerdlow said. “Without criminal defense lawyers who are able to operate free of interference from the state, there can be little hope of addressing Uzbekistan’s pervasive torture epidemic.”