Lutsenko trial: Court allows witness testimony to be read in his absenceYet more witnesses testify in Yury Lutsenko’s favourFormer German Ambassador: Ukrainians must not be held hostage by one leaderDanish Helsinki Committee issues damning legal assessment of the Tymoshenko caseUkraine parliament rejects Tymoshenko releaseChanges in judge corps in the court where Tymoshenko appeal to be heardJose Manuel Pintu Teisheira: Yanukovych understands what needs to be doneGerman Minister: Release of political prisoners in Ukraine would be a signal to the EUTymoshenko presented with new charges in SIZO cellThe number of criminal investigations against Tymoshenko is growingPACE Co-Rapporteurs: Serious measures cannot be excludedPACE Co-Rapporteurs not allowed to visit Yulia TymoshenkoBritish Foreign Minister: The fate of the EU-Ukraine Association Agreement is up to KyivLutsenko Trial: Witnesses questioned after the InvestigationYet another witness confirms Lutsenko’s predecessors could also be prosecutedHard-hitting Resolution on Ukraine also likely from US CongressUkraine’s Apathy TestPolitical Motives behind Failure to treat Yury Lutsenko?European Parliament Resolution: Tymoshenko trial could jeopardise EU-Ukraine association agreementHuman rights organizations speak out on the sentencing of Yulia Tymoshenko
• Activity / Political persecution in modern Ukraine
• Topics / Politics and human rights
• Topics / The right to a fair trial

Lutsenko: Visits not allowed, so birthday greetings on banners 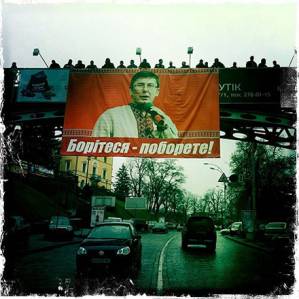 On Wednesday, friends of the former Minister of Internal Affairs and opposition politician Yury Lutsenko prepared a surprise for his 47th birthday which he is spending in detention on charges of abuse of office.  They hung a huge banner with his picture and the words: “Fight and you’ll win”.

Journalist Mustafa Nayem informed on his Facebook, page that the banner, 8 x 15 m. was being held by majors and colonels from the Ministry of Internal Affairs.

Mr Lutsenko’s colleagues and friends were not allowed to visit him in the SIZO where he has been held now for almost a year.  His wife, who visited him first with his lawyers earlier in the day and then with their two sons, spoke of a birthday with painkillers.  As reported months ago, doctors twice recommended Yury Lutsenko received hospital care.  This has not happened.  It was reported on Wednesday evening that a group of doctors was again to examine him.

Yury Lutsenko was arrested in late December by 11 Special Force Alfa officers when walking his dog.  The criminal investigation had been initiated in November and Lutsenko had given a signed undertaking not to leave his place of residence.  He did not do so and any reasons given for his remand in custody were seriously questionable.  There is also grave concern, both within Ukraine and from the democratic community, regarding the charges against him. An analysis of these can be found in the second report by the Danish Helsinki Committee of Human Rights