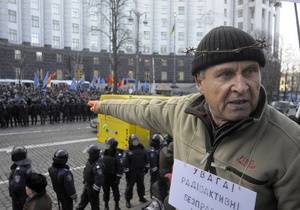 The Centre for Society Research has analyzed the protests over the last 2 weeks and what they show about the tactics being used by the Authorities. There were 110 protests between 26 November and 9 December.  Following the death on 27 November of a protester – Gennady Konoplyov – during the dismantling by police and Emergencies Ministry officers of a tent holding hunger strikers in Donetsk, protests over non-payment or reduction in social benefits are continuing.

Almost a third (33) of all street protests related to social benefits.

And these elicited a disproportionately large percentage of the repressive actions from the Authorities. Two thirds of such repressive measures (10) were directed against people defending social benefits.

The day after Mr Konoplyov died there was a rally of former Chornobyl clean-up workers outside the Pension Fund demanding that those responsible be punished and the dismissal of the Donetsk Governor.

There was also a rally of deceived investors who tried to force their way into the Donetsk State Administration.  This resulted in scuffles with the Administration’s guards.

That same day the President promised from 2012 to double former Chornobyl clean-up workers’ pensions, and on 29 November the Cabinet of Ministers signed an order increasing their pensions.

The Donetsk regional organization “Chornobyl Union of Ukraine” signed a memorandum of cooperation with the Donetsk Regional Governor. This organization has no connection with the hunger strike and tent camp which had been engaged in protest at that time for two weeks already. Similar memoranda were signed in Vinnytsa and Kyiv, although in Kyiv those entitled to benefits were “represented” by the Union of Afghanistan Veterans. On 3 December this same organization signed a memorandum in Kirovohrad, and on 6 December in Yalta.

On 29 November, on the application of the Kyiv City State Administration the District Administrative Court in Kyiv banned protests by people defending their right to social benefits outside the Cabinet of Ministers.

There were memorial protests in memory of Gennady Konoplyov throughout the country, as well as actions in solidarity with the Donetsk former Chornobyl clean-up workers.  In Kyiv the protesters tried to block Hrushevsky St and put up a tent camp outside the Cabinet of Ministers. This and other actions met with resistance from Berkut riot officers. During the protests on 30 November 2 people were detained.

The Chornobyl clean-up workers began a hunger strike in Kyiv.  There were protests in solidarity with Donetsk in Zaporizhya on 2 December; a tent camp was erected in Lviv on 6 December as well as a rally in Kramatorsk.

On 8 December a protest over social payments began in Kharkiv, with the protesters promising it would be indefinite. The Kharkiv Regional Administrative Court almost immediately banned the protest, claiming this to be connected with preparations for the New Year festivities.

On 1 December court bailiffs informed the Donetsk protesters of a new court order telling them to stop their protest by 10.00 on 13 December. On 14 December Ukraine marks Day of Remembrance for the Chornobyl clean-up workers.

On that same day for the first time two representatives of the Pension Fund appeared at the tent camp and asked the protesters what their demands were.  The Governor finally appeared on 6 December, presumably to make up for the failure to appear of the President whose presence had been demanded.

On 9 December the former Chornobyl clean-up workers stopped their hunger strike in Kyiv, and those in Kharkiv did not dare to go ahead with the banned protest. In Donetsk the organization Chornobyl – Unity gave up their protest after reaching an agreement with the Authorities.

As reported here, not all protesters in Kyiv and Donetsk went along with this (see the links below).

The chronology of events shows how apparently contradictory, yet pretty effective the policy of the Authorities is proving in try to neutralize potentially dangerous anger. On the one hand, it acts magnanimous trying not to draw attention to what it cost members of the public to achieve this. They hold negotiations with those prepared to take part in them. This is regardless of how much those groups in fact can be said to represent the protesters. At the same time, the courts and law enforcement bodies are being used to prevent peaceful protest.

The Centre says that the tactics appear to be working. The last centre of protest, at the tent camp in Donetsk, which had been there for almost a month gave up on 11 December. Some of the protesters, together with the organizations holding the negotiations, decided to be content with the “charity” handed out, while those taking a more political, anti-government line, as well as the repressive measures used against peaceful protesters are marginalized.