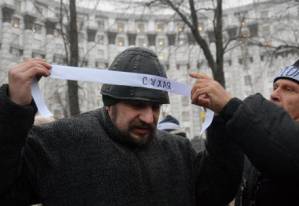 Protest outside the Cabinet of Ministers, UNIAN photo

Kharkiv former Chornobyl clean-up workers active in the protests against cuts and non-payment of social benefits have received summonses from the Kharkiv Regional MIA CID as witnesses in a criminal investigation. Early on Friday morning one of the men was forcibly brought to the investigation unit.  There were absolutely no grounds for this, and the motive seems worryingly clear – to prevent Vladimir Proskurin from attending an important congress in Kyiv.

The said criminal investigation is over alleged forgery of the ID documents confirming that a person took part in the clean-up efforts after the Chornobyl Disaster.  Even if there are such forgeries, one can safely assume that they have nothing to do with the men who have taken part in hunger strikes and other protests, and have been subjected to rough treatment by law enforcement bodies following court orders banning their peaceful protest,

On the other hand, some of those activists who have received summonses were supposed to be in Kyiv on Friday for a vital meeting of the NGO Chornobyl Union of Ukraine.  This organization has been very active in holding negotiations and reaching compromise with the Authorities, and by no means all former Chornobyl clean-up workers feel that they are representing their interests. Hence the importance of the meeting on Friday, and hence, one must assume, the sudden urgent need to question the specific activists.  The men involved contacted the investigation department and asked if they could come on another day.  An entirely reasonable request yet it was turned down.

This refusal would seem to demonstrate the link between the sudden activity of the law enforcement bodies to investigate possible cases of fraud and attempts by the Authorities to diffuse social protest by choosing whom they negotiate with and marginalizing others.  The increasingly coordinated efforts of politicians, the courts, the police and now police investigators, to stop people exercising their right to peaceful protest and association, have no place in a democracy.