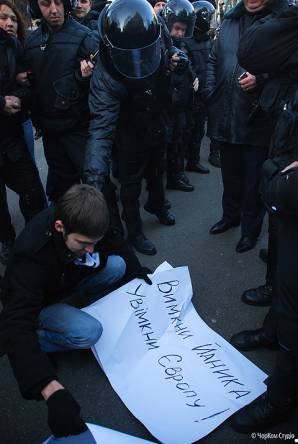 15 members of the Coalition of Participants in the Orange Revolution and the Black Committee were detained on Monday outside the President’s Administration during a demonstration in favour of European integration.

The demonstrators were taken away by a police van. They told journalists that although they  had presented the relevant notification of the planned event and that there had been no court ban, they had been stopped by police on Instytutska St.  they tried to break through the police cordon at which point they were detained.

The police did not detain journalists who were informed by a police officer that they had received an order from management to not let anybody near the President’s Administration except accredited journalists.

The police stated that administrative protocols were being drawn up against the demonstrators under Article 185 of the Code of Administrative Offences (resisting a law enforcement officer).  This carries a fine of from 8 to 15 times the minimum wage before tax.

The demonstrators were released a few hours later. This followed scuffles in the police station in the presence of MP Volodymyr Aryev.  According to Mykhailo Lebed from the Regional Initiatives Foundation, the detainees were not registered as having entered the police station which is a clear infringement of the law.

From reports at Ukrainska Pravda