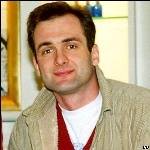 Georgy Gongadze was murdered in September 2000

The Pechersky District Court in Kyiv on Monday 26 December decided that the decision by the Prosecutor General’s Office back in 2001 to initiate criminal proceedings against former Presidential guard Mykola Melnychenko had been lawful. In so doing it rejected an appeal from Mr Melnychenko’s lawyer, Mykola Nedilko.

The ruling comes nearly two weeks after the same court on 14 December quashed the criminal proceedings against Leonid Kuchma over the murder of journalist Georgy Gongadze.  The court stated that there were no grounds for initiating such an investigation since a Constitutional Court judgement from October 2011 prevented the tapes made by Melnychenko as being used as evidence (as having been made by a person not authorized to do so).

The decision to drop the charges against Kuchma elicited outrage among Ukrainian and international media organizations and has been appealed by the lawyer representing Myroslava Gongadze (as well, perhaps less convincingly, by the Prosecutor General).

The tapes made by Melnychenko in the office of President Kuchma had been declared material evidence in the criminal prosecution,

This now means that unless the appeal is successful, any trial against Kuchma has been declared without grounds since the main evidence was not obtained by those with the authority to carry out surveillance.

Those with such authority were totally under the control of the President.

Major Melnychenko is indeed facing charges for making the recordings.