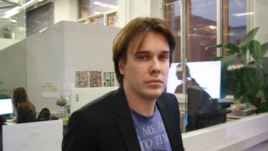 It was a familiar scenario. A Kremlin-linked website posts embarrassing wiretaps of a prominent opposition figure's phone calls in an apparent effort to discredit him and to dispirit the regime's critics.

But this time the story went way off script. Less than 24 hours after the website Lifenews.ru posted recordings of Boris Nemtsov's phone calls -- in which he referred to fellow oppositionist Yevgenia Chirikova as a  “bitch or an idiot” -- the two appeared together in a television studio to make up before the public.

After apologizing to Chirikova, Nemtsov stressed that the authorities had failed in their efforts to divide the opposition. "Now we'll be even more united and [we will] work hand in hand toward our goal of ridding Russia of swindlers and thieves, " he said.

This remarkable display was, of course, not seen on state television. In fact, it wasn't shown on a traditional television channel at all.

It was broadcast on December 20 on Dozhd TV, a hip new Internet station that has been in existence for less than two years but has already attracted hundreds of thousands of viewers seeking an alternative to the scripted, monochrome, and heavily censored programming offered by the Kremlin-controlled channels.

The venture's success illustrates both the public's hunger for unfiltered news and information as well as the degree to which the Internet has cut into the Kremlin's traditional dominance of electronic media.

“Nature abhors a vacuum, " says Boris Timoshenko, a media analyst at the Glasnost Defense Foundation. "When all the federal [channels] -- and not only those -- gradually stopped broadcasting any critical information about the authorities, little by little, this niche was filled by a small television station called Dozhd."

Dozhd TV, which translates as "Rain TV, " really came into its own in the aftermath of the disputed December 4 parliamentary elections and the ensuing antigovernment protests.

While the state-controlled media was ignoring allegations of voter fraud and giving scant attention to mass protests, Dozhd was covering them extensively -- and professionally.

And the effort paid off. During its coverage of the December 10 protests, when more than 40, 000 flocked to the streets, Dozhd shattered its page-views record, garnering 1 million unique visitors in a single day -- as many as it took in an entire month in October.

Since then, Dozhd has been averaging 800, 000 unique visitors per week, according to brand manager Darya Simonenko.

But despite coming of age at a time when the Russian opposition is finding its voice, the station's management insists it doesn't have a political agenda and is only seeking to produce quality programming.

Indeed, in addition to covering the opposition, the channel has also scored interviews with some top Kremlin and government officials including President Dmitry Medvedev and Prime Minister Vladimir Putin's chief spokesman, Dmitry Peskov.

Reclining in Dozhd’s ultramodern studio -- which resembles an art gallery with its glass paneling, chandeliers and bright colors -- Editor In Chief Mikhail Zygar indicates that he hopes the station's example will help shake up Russia's drab media market.

"We are trying to change things, " he says. "We make good television. People say we’re an opposition station, but that's not true, we're a good station....

"We allow everyone to speak out and we believe that all channels should do the same. Unfortunately, that's not the case, but we hope that our example will catch on, and that gradually they will all start working like that."

​​In recent weeks, there have been signs that the state-controlled media is taking notice.

Aleksei Pivovarov, a prominent reporter for the pro-Kremlin NTV channel, which is owned by the state-run natural gas monopoly Gazprom, threatened to strike if the December 10 protests were not covered.

These appeals were followed by small signs of change in state media. After ignoring the initial post-election protests on December 5-6, for example, all state channels provided national coverage of the large protests that swept Moscow and other cities on December 10.

“The television market has arrived at a point where it can no longer develop as it has for the past ten years, " he says. "A critical moment has come and there will be a collapse of the market and the entire television space. We are a sort of catalyst in all this. Even the federal channels cannot continue working according to the artificial mode that they have done in the last years.

"There are already rebellions at the editorial level, [and] at the correspondent level when they are refusing to report on events in this or that way. This is happening because journalists have a conscience too, and they are fed up with the social contract."

Timoshenko believes it is still too early to speak of a revolution in Russian television, but adds that Dozhd has had an undeniable impact.

An Island Of Liberalism

All three outlets are based among the cluster of art galleries in the converted “Krasny Oktyabr” (Red October) chocolate factory -- an island in the Moscow River, across from the Kremlin, that has become a hub for the capital's hip young liberal intelligentsia.

The synergy among Sindeyeva's media outlets paid off when Dozhd, like a number of liberal media outlets, was hit by a denial-of-service hacker attack on December 5 -- the first day of the postelection protests.

Despite the attack, the channel was able to continue their live coverage of the protests, broadcasting via Slon.ru's site.

Founded in April 2010, Dozhd has yet to turn a profit, although it expects to break even next year, according to Simonenko. It is currently searching for an investor, and in a nod to the channel’s rising sway, billionaire tycoon and presidential candidate Mikhail Prokhorov has been in negotiations to become a shareholder, she said.

Dozhd's mostly young employees praise the company's freestyle work environment and its edgy open-plan facilities. “Here you can breathe -- both physically because of the space where this station is located and in the spiritual sense of professional freedom, "  Davletgildeyev says.

"It’s the most important ingredient of Dozhd and the biggest thing that drew me and which continues to draw people to work here because -- against the backdrop of utterly banal state media -- this is a place that isn’t bound by the [Kremlin's] rules of the game.”

​​Popovnin spent the months of June and July living in a tent on Dozhd’s roof from where he delivered his weather forecast against the backdrop of the summer Moscow skyline.

Editor In Chief Zygar claims that the channel has not experienced any official harassment yet.

He also denies media reports that the Russian Communications Monitor had requested recordings of their election and protests coverage. “I always hope that the people in power don't want to live in the Middle Ages or in the Stone Age, " he says. "And that they don't want us to just have exclusively Soviet television that everyone is fed up with.”